It’s a pretty lovely screen, similar in quality to what you‘ll find on the pricier iPad Pro. This is what Apple calls a “Liquid Retina Display,” with 2,360 x 1,460 resolution and a pixel density of 264 ppi. Also like the Pro (and last year’s Air), it supports the wider P3 color gamut and makes use of Apple’s True Tone technology, which automatically adjusts the color temperature depending on the ambient light. (Of course, nearly every Apple product from iMacs to iPhones has True Tone at this point.)

One thing you won’t get on the Air: the iPad Pro’s faster-refreshing 120Hz screen. It’s also a little less bright: 500 nits versus 600. Gotta save something for the top-shelf model, right?

I don’t have much to complain about after using the tablet for nearly a week. I typed, browsed the web, streamed movies, scrolled through my Photos library. Everything looked sharp and punchy, but never oversaturated. The anti-reflective coating also meant I had some wide viewing angles.

If you’ll put up with my nitpicking for just a minute, it’s a shame that Apple doesn’t use OLED displays on its tablets, not even the iPad Pro. The “Liquid” in Liquid Retina Display is a nod to Liquid Crystal Display, normally abbreviated as LCD. You might not notice the difference on your home screen or in apps with white backgrounds, but after spending hours in Google Docs with Dark Mode enabled, I couldn’t help but notice that the blacks just weren’t as black as on my three-year-old iPhone X. Let’s hope the rumor is true that Apple will begin upgrading its tablets with mini-LED panels, which would bring similar benefits as OLED technology. 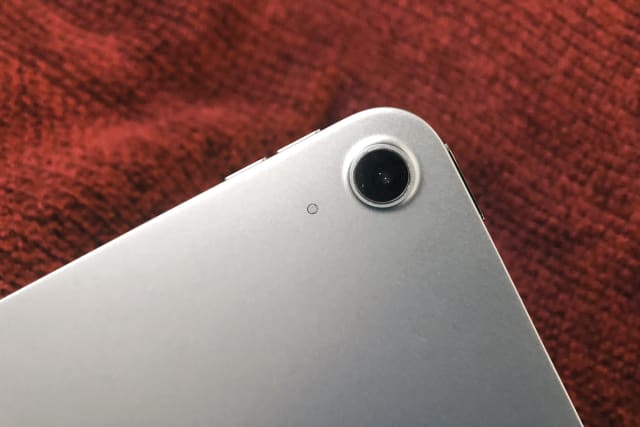 I’ll finish up our hardware tour where I started: on the backside. This year’s Air has the same camera resolution as before — 12 megapixels on the back and 7MP up front. Resolution aside, though, this is not the same camera setup. Spec wise, the rear camera now matches what you’ll find on the Pro line, with the ability to shoot video in 4K (and snap stills up to 8MP while shooting). The aperture on the back camera is also significantly improved — f/1.8, compared with f/2.4 on the 2019 model. The front camera, meanwhile, promises to hold up better in low light. (Its aperture remains unchanged, however.) 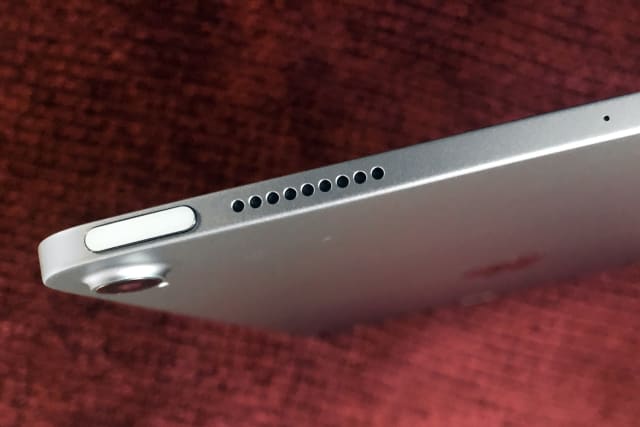 Apple streamlined the iPad setup process years ago, but it’s worth a reminder how easy it is to get started, especially if you already own an iOS device. Just hold your iPhone near the iPad and use your phone’s camera to capture a code on the iPad’s screen. That’s it. I will say that setting up Touch ID felt a little clumsy compared to on a Mac. You have to hold your finger over the narrow button on the top edge, but it feels less intuitive than running your finger over a smooth sensor. I registered my fingerprint in the end, but it took longer than I on my Mac.

Now that I have Touch ID set up, I don’t use it as much as I’d like. Part of that’s that I often use the tablet docked in the Magic Keyboard, at which point the button is on the upper left, and feels awkward to reach with either of my index fingers. It’s a shame that the Air still doesn’t have Face ID, a feature you’ll find on the iPad Pro, and that iPhones of course have had for years.

OK, are you done listening to me kvetch about the biometric logins? Good, because I’m done complaining.

There’s otherwise a lot to like here. The new Air was the first Apple device to use the company’s new A14 Bionic chip, which later turned up in the new iPhone 12 line as well. The chip’s 5nm process is more efficiently designed, allowing Apple to pack in more transistors — 11.8 billion, to be exact. The system-on-a-chip includes a six-core CPU with four high-efficiency cores and two high-performance ones. The four-core GPU, meanwhile, is up to 30 percent faster than the previous generation, according to Apple. 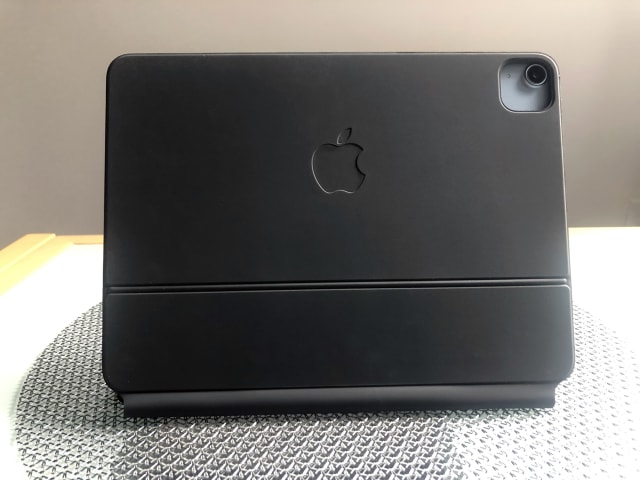 In practice, it’s just a really zippy device. In writing this review, I had the Google Docs app open at all times, but frequently needed to open other apps like Chrome and Slack, either at full-screen or split-screen view. Regardless, the device seemed to have no problem keeping up with my multitasking and frequent app-switching.

To give the machine more of a workout, I exported a 1.6GB 4K video to 1080 in Adobe Premiere Rush — that consistently took a minute and 40 seconds across multiple tests. I also downloaded the game Pascal’s Wager and the Apple Arcade games Redout and Beyond the Steel Sky. Each ran smoothly, with the details rendering nicely on the 264-pixel-per-inch screen. Also, as much as I nitpick about the LCD’s black levels compared to an iPhone’s OLED panel, the screen is a good match for the vibrant colors in these games, particularly Redout and the trippy Sayonara Wild Hearts.

And it’s not just performance that’s fast. The new Air also steps up to WiFi 6 (802.11ax), with 60 percent faster LTE speeds on cellular models. I normally have a love-hate relationship with my home WiFi, but I noticed off the bat that the iPad made quick work of downloading the six Apple TV+ movies I use in my battery testing. The last time I did this, when I tested the MacBook Pro, that same series of downloads turned into an hours-long ordeal. If you’re looking for harder numbers (that would help, no?) I ran Speedtest on a Verizon Fios connection, and saw download speeds of 366.6 Mbps and uploads of 416.4 Mbps.

Rounding out your connectivity options, there’s also a Bluetooth 5.0 radio under the hood, along with a nano-SIM slot and eSIM.

Throughout, the Air delivers solid battery life. Apple claims it’s capable of up to 10 hours with web browsing or video playback, and up to nine hours on LTE. (These are the same battery claims Apple made on last year’s Air.) I suspect this 10-hour promise is on the conservative side, as is often the case with Apple’s battery estimates. After using Chrome and Google Docs unplugged for about two and a half hours, I still had around 80 percent, a run-rate that would have put me closer to 12.5 hours.

Dropbox's family plan offers a shared 2TB for $17 per month

Abode opens up pre-orders for its Outdoor Smart Camera