As is typical with Beats headphones, there’s no companion app on iOS with the Flex. Instead, the company includes everything right inside the Settings menu on iPhone and iPad. That means all you’ll have to do is turn on the Flex near your iOS (or iPadOS) device and a pairing pop-up will automatically be displayed. That message will also tell you the current battery level for the earbuds and allows you to connect to that phone or tablet quickly when you need to do so in the future. Right now, that pop-up card only says Beats Flex, but doesn’t have an image of the device. The company says the generic icon will be replaced in a pending iOS update.

The fast-pairing process is all handled by Apple’s W1 chip, the same component that brought it to the BeatsX and other Beats headphones. The W1 also syncs the Flex with iCloud, so the earbuds are ready to be used on any other Apple products you have linked to your account. More interestingly, the chip offers Audio Sharing: the ability to wirelessly stream whatever you’re listening to — or the sound from whatever you’re watching — to another set of Beats headphones or Apple AirPods. And, importantly, fast pairing works with the feature as well. All you have to do is bring a second audio accessory near the source device and they will connect in a flash. This works on iPhone, iPad and Apple TV. What’s more, each user can independently control their own volume.

On Android, you’ll need to download the Beats app from the Google Play Store. Once installed, you’ll have access to quick pairing, battery levels and any firmware updates that may come along in the future. What you can’t do on either iOS or Android is adjust the EQ or customize the on-board controls. The latter are pretty well sorted already, but the Flex could use a little help in the audio department. Of course, these are $50 earbuds, so it’s no surprise there’s not an adjustable equalizer. Beats hasn’t done that in the past, and the Flex would be a weird place to start. 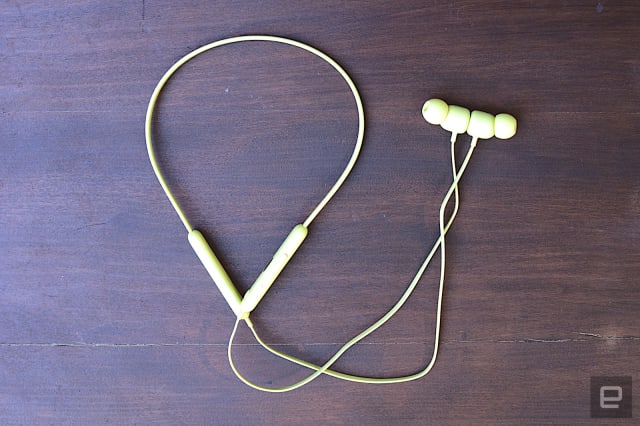 Beats promises up to 12 hours on a charge with the Flex. That’s four more hours than the BeatsX, and about double what a lot of true wireless options will give you. Thankfully, I didn’t have any trouble getting to the full promised listening time. Like its other headphones and earbuds, Beats included its Fast Fuel quick charging feature. Here, you’ll get an hour and a half of use if you charge for just 10 minutes. Handy if you’re heading out for a run and you forgot to charge beforehand.

At $50, the Beats Flex is an attractive proposition price-wise, but there are some solid alternatives in that price range. If you like wireless earbuds that are attached with a cable, I like Jaybird’s Tarah. They debuted at $100 in 2018, but now they’re regularly available for $50 or less. Plus, they’re designed for workouts, so you don’t have to worry about mucking these up. One downside is they only last for six hours on a charge.

The new Powerbeats are also worth a look. They’re three times more expensive than the Flex at $150, but the audio is so much better. They also pack in the latest Apple Bluetooth chip, the H1, so you get access to things like hands-free Siri on top of the quick-pairing. They still have the wired-wireless style similar to the Flex and 15 hours of play time. However, you do have to decide if the over-the-ear hook design is something you can live with on your earbuds. It will be just fine for many, but it causes problems for those who wear glasses and hats.

With the Flex, Beats accomplished what it set out to do. The company is offering a low-cost option for anyone who’s looking for wireless earbuds and doesn’t want to spend a lot of money. Especially those people who are looking for something to replace the Earpods that Apple no longer gives them for free with a new iPhone. Plus, Beats managed to pack features like quick pairing that go beyond the basic on-board controls. And it included great battery life to just round out a solid features list. But even at $50, you have to be willing to make some sacrifices — mostly in the audio department. At the end of the day, the Beats Flex works well, and sounds okay enough to be just fine for a lot of people. Others will be left wanting more.