Indeed, the key difference with this new version is the color. In the dark, this Powerbeats model glows bright green, and in the daylight, it’s more of a minty hue. As you might expect, Ambush branding is stamped on in close proximity to the iconic Beats “b” logo. There’s also a co-branded ripstop pouch to haul these around in. Aside from aesthetics though, these wireless earbuds are unchanged — and that’s not necessarily a bad thing. 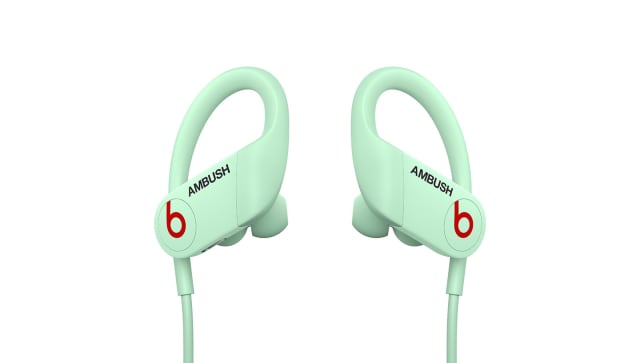 Powerbeats are a very solid set of earbuds for the price, especially if you’re looking for something to use during your workouts. They’re wireless, but still tethered, so you won’t have to worry about losing individual buds. Plus, they’re IPX4-rated for sweat and water resistance. Beats also moved the on-board controls from an in-line remote onto the earbuds themselves. Those are physical buttons too, so they’re more reliable than the increasingly common touch panels.

Perhaps most importantly, Powerbeats pack Apple’s H1 headphone chip that offers not only hands-free access to Siri, but easy setup, fast pairing and the ability to switch between iCloud-connected devices quickly. The earbuds also last up to 15 hours on a charge and offer comparable sound quality to the pricier, and true wireless, Powerbeats Pro.

The Ambush version of Powerbeats will be available tomorrow, November 18th, for $199.95 at Apple, Dover Street Market, select Nordstrom stores. That’s $50 more than the “standard” version that debuted back in the spring.