But I want to start with one of the things that the Arcades gets so impressively right: the interface. Considering the breadth of effects it covers and the number of options, it would have been easy for the pedal to become an unwieldy mess. But on the front are just two foot switches, two buttons, four knobs and a small screen. (Just to round out the hardware, around back you’ll also find MIDI in and an expression pedal jack.)

The display is bright enough to be seen even in direct sunlight. While that probably won’t be a scenario you encounter often, I feel confident saying the glare of stage lights shouldn’t be too much of an issue. It’s small and recessed enough that your foot won’t pose a danger to it. Plus, it’s sandwiched directly in the middle of the four knobs, so you’d really have to go out of your way to stomp on it.

Note about the demos

All of the demos in this review are played on a Fender Toronado and recorded direct into Ableton and Guitar Rig 5 using the Jump amp (Marshall JMP). Any additional drive or distortion is provided by smallsound/bigsound’s Fuck Overdrive. No other effects are used except in the Grain demo which also includes reverb from Walrus Audio’s Slö.

Since this is a multi-effects pedal, the knobs have to perform multiple functions. They’re labeled A, B, C and D, and the screen tells you what they’re actually controlling at a given time, whether that’s the decay of a reverb or the dry mix of a synth effect. The two small buttons on the front allow you to navigate the screen. They perform multiple duties as well, but they’re easy to master. On the left is the PRGM button, which cycles through the eight effects on each card when you tap it. Long pressing brings up a system menu, where you can save and load presets, change the MIDI channel or control the quantization of the DSP clock. (More on that later.)

The Page button on the right swaps between two sets of controls for the knobs. One is global settings like wet and dry volume levels, tone and clock speed (again, we’ll dig into this later); the other set is specific to each effect. Long pressing the Page button unlocks one of the Arcades’ greatest powers: the assignment menu. This is where you can assign parameter changes to the AUX footswitch or an expression pedal.

The AUX/Tap footswitch on the left can be either a tap tempo (very useful for delays) or an auxiliary control that allows you to immediately jump to a second set of settings. You can use it to crank the delay feedback to the max for wild self-oscillating freakouts. Or switch between octaves and fifths on a pitch shifting program. Or freeze a reverb to create a pad for you to solo over.

You can also assign multiple parameters to the footswitch or to an expression pedal, too. So, if you want to smoothly turn down the sample rate and while simultaneously increasing the flutter on the lo-fi Delay, you can do that. You can even set the range of the expression pedal so if you want a full sweep to only make subtle changes, it can do that.

And look, there’s plenty of pedals out there with assignable footswitches and expression ports. But the simplicity of assigning things here and the breadth of options is impressive. All you have to do is turn the knob corresponding to the parameter you want to what the secondary setting should be and voila!

Without a screen, pedals usually rely on obscure button combinations for assigning parameters. You’re often only able to assign one at a time, and there’s no way to quickly see what’s assigned. Even many pedals with displays don’t feel this intuitive or direct. 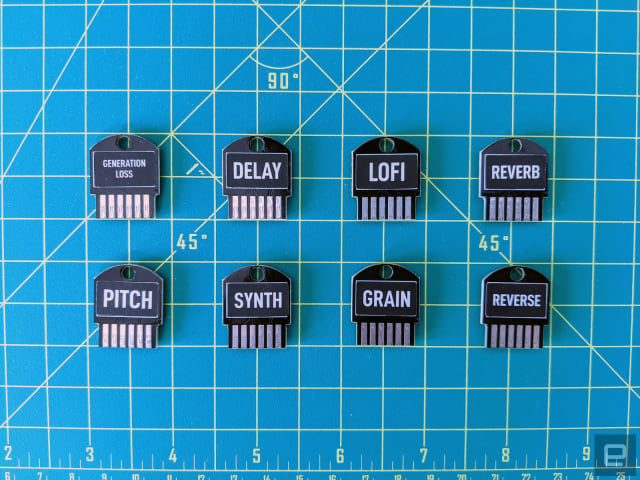 All of this is at least in part due to a decision made in how to handle the cartridges. See, the Console and Z-DSP use simple EEPROM cards with program data that’s fed to the FV-1 inside. The Arcades actually uses a microcontroller to emulate an EEPROM. It’s also what tells the screen what to display, allows for the saving and loading of presets and does some other housekeeping work. So, while the cards might seem a little pricey at $49 apiece, know that you’re not just paying for a glorified SD card. (You also get two of your choosing with the pedal.)

Cooper FX doesn’t claim the cards are hot-swappable, but I’d say a good 75 percent of the time I could get a newly inserted card to load without having to power the pedal on and off.

Each of the eight currently available cards are loosely themed around a particular kind of effect: Delay, Reverb, LoFi, Pitch, Synth, Grain (granular), Reverse and Generation Loss (after the beloved pedal of the same name built by Cooper FX). There is a decent amount of overlap between the cards. Not that the same exact effects are replicated, but they have a very similar vibe. And most of the effects lean into the lo-fi character that Cooper is best known for. There are crisp clean digital delays here and endless unnatural reverbs that seem like something straight out of a sci-fi movie. But a good chunk of the effects do things like try to emulate VHS warbles and aging vinyl or do glitchy granular processing.

There’s a VHS algorithm on the Reverb, Delay and Generation Loss cards. And, in addition to a dedicated LoFi card, there are LoFi programs on the Synth, Reverse and Grain cards. Majeski knows his audience and is catering to it. They deliver things like random vibrato and bit rate reduction to capture the feel of aging tapes, old samplers and skipping CDs. These sorts of effects are very in vogue right now, and Cooper FX has proven itself quite adept at them.

The most obvious sacrifice is going from six controls to four on the Arcades. To compensate the various programs on the Generation Loss card focus on specific combinations of its parameters and explore relationships between them. Think of it kind of like a guided tour through the Generation Loss’ greatest hits.

Safaree Reveals A Video Of Him Setting Up His Amazing Studio

Overcrowd: A Commute ‘Em Up Full Release Review – A Sim Management Game With A Difference