Corsair did its best, but I still dislike opto-mechanical keyboards 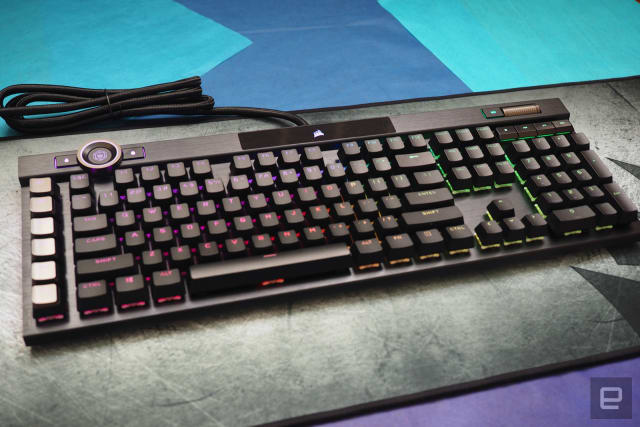 Corsair is calling the K100 its “pinnacle” of its keyboard line, and it certainly packs in every feature that Corsair has debuted or iterated on over the years, but with small improvements that are in fact, better. The lighting under every key is a lot brighter, the media buttons are bigger and clickier and the roll bar on the upper right side is a lot smoother than previous models.

Even the plastic and metal build is stronger and heavier than older decks like my beloved K70. All those little changes alone would make this just a great keyboard to have. You don’t even have to settle for the opto-mechanical keys if you don’t really want them; the K100 is going to be available with regular Cherry mechanical keys as well. But this is Corsair’s first attempt at custom switches, so that’s the model I wanted to try out. 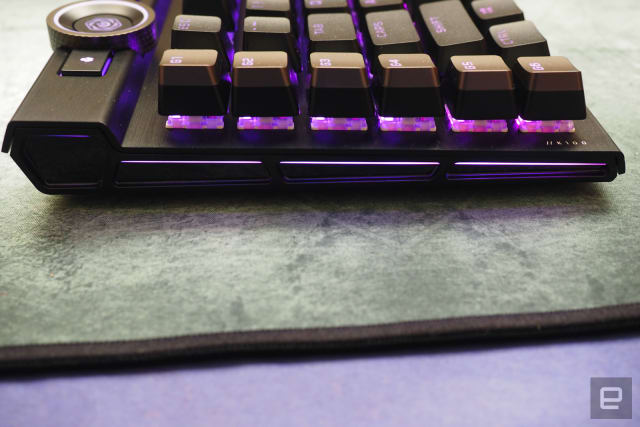 The keys are known as OPX, and they’re backed up by Corsair’s new AXON processing technology. It polls at 4,000 Hz, which the company says is 4x faster than standard gaming keyboards. But a 1mm actuation point doesn’t hurt either, and that’s a difference I can discern immediately when typing. It’s very responsive, and I don’t have to put a lot of force on the keys. However, aside from the space bar, none of the keys are so sensitive that simply brushing your hand against them registers an input. That’s a blessing if you’re a sloppy typist like I am, and certainly a must during a tense game where every keystroke counts.

The one thing that Corsair still hasn’t solved for me, however, is that the sound and feel of opto-mechanical keys still isn’t on par with standard mechanical keys. I wasn’t a big fan of Razer’s Huntsman because the keys just didn’t sound good; there was a slight metallic ring to each keypress. The K100 also has a slight hollowness to its keystrokes that some might find unpleasant. In comparison to the MX Speed keys of the K70 it’s also not as soft.

But that’s really a matter of personal preference. Some folks might prefer the sharper tactile feedback of the K100. And even the click of the keys isn’t a big deal if you’re wearing a headset. However, it will probably drive the people around you nuts, especially since the keys all sound slightly different based on their positions on the board. It’s not something you’ll always notice when you’re mostly using the arrow and WASD keys, but I’m typing this hands-on with the K100 and it’s starting to grate on me. 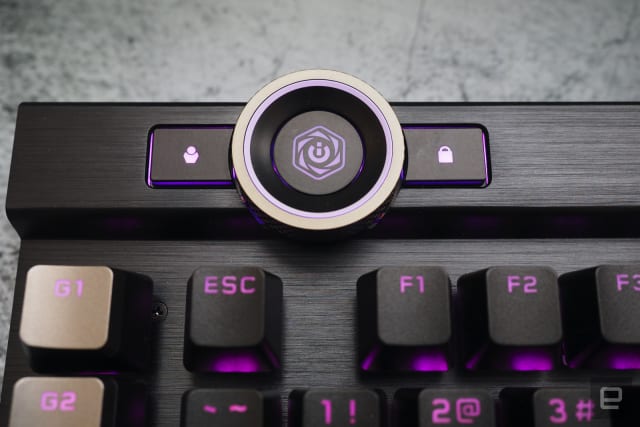 Luckily it’s easy enough to turn on my music by mashing the media buttons, which really do feel so much snappier than the older models. However, now there’s a wheel on the left side of the deck as well that can control your media and more. It can shuttle tracks and adjust the brightness of the key lighting, you just need to push it to switch functions. You can even use the dial to record macros on the fly, instead of having to mess with the iCUE software.

In fact, a lot of the features on the K100 let you circumvent the software entirely. Want to adjust the lighting pattern of the keyboard? There are hotkeys for that. But if you do want to mess around with even more customizations iCUE has been upgraded to allow separate hardware and software configuration for the K100, saving your profile to the keyboard’s on-board storage. You can also set the macro keys from here, which can now be configured with features from the Elgato Stream Deck software.

Read More: Corsair did its best, but I still dislike opto-mechanical keyboards