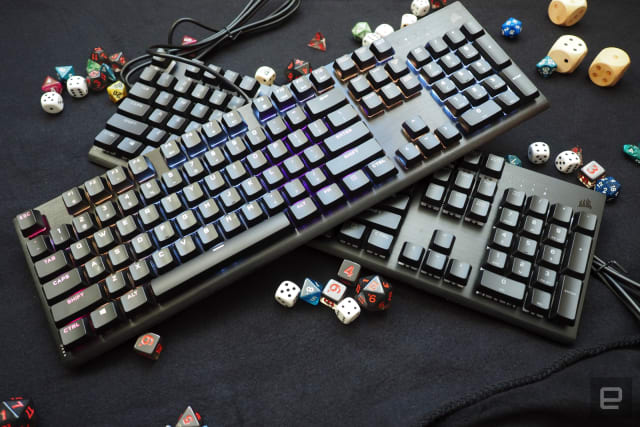 When viewed from above, there doesn’t seem to be a huge difference between the regular K60 and the Low Profile model. They have the same number of keys, packaged into a deck that’s the same width and depth. It’s the height that marks the major difference, with the Low Profile version sitting nine millimeters shorter than its sibling. It doesn’t seem like a big change, but it does make an impact.

The colors on the K60 Pro Low Profile seem muted in comparison, with the higher-sitting K60 shining like Times Square. That’s partly because while the key caps on both models are identical, the switches on the Low Profile are shorter and allow less light to escape from underneath the cap. So the keyboard ends up being low profile in not just height, but lighting scheme. 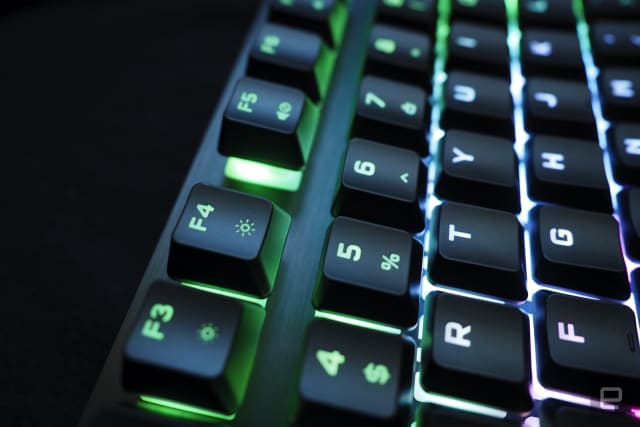 The regular K60 Pro uses linear and smooth Cherry Viola switches, which feel fine but make a slight metallic scraping sound when pressed down. This isn’t a big deal when you’re wearing a headset, but if anyone around you has sensitive hearing, they might find it annoying. The Low Profile is much more pleasant to listen to and type on. Its Low Profile Cherry MX Speed keys feel soft and muted compared to those on other Corsair decks, but there’s still a very firm bounce to them with an incredibly short actuation point. That short press means it’s easy to accidentally hit the spacebar if your hand were to brush over the deck, but I didn’t have a problem with any other key.

Since there are no extra buttons or dials on the keyboard itself, all customization has to be done via Corsair’s iQUE software, which has only gotten more user friendly over the years. There are plenty of built-in presets so you don’t have to spend too much time designing patterns, and it’s easy enough to just make the whole deck glow white if you’re trying not to have it scream “gamer gear.”

'Ratatouille' musical made by TikTok creators will stream on January 1st

The Instant Pot Duo Nova is back down to $50