There is hope, however. A recent study in the journal Nature found that “restoring 15 percent of converted lands in priority areas could avoid 60 percent of expected extinctions while sequestering 299 gigatonnes of CO2.” That’s a third of the total increase of atmospheric carbon dioxide since the start of the Industrial Revolution.

In response, governments, NGOs, charities and even private businesses have devised and implemented reforestation plans that work much like the “take-a-penny, leave-a-penny” trays next to your bodega’s cash register do. Essentially they seek to replace what has been removed in order to maintain balance within the system. In 2011, for example, Germany and the International Union for Conservation of Nature launched the Bonn Challenge which seeks to restore 350 million hectares (Mha) of land by 2030. To date, more than 43 nations located in tropical and subtropical climates have pledged to restore 300 Mha.

These are lofty goals indeed. The problem is, reforestation efforts are labor intensive. You need boots on the ground and hands in the soil for these campaigns to be successful and, as such, often become long, slogging affairs. For example, the Worldview International Foundation in 2012, launched a campaign to plant a billion mangrove trees in the nation of Myanmar. In the subsequent seven years, local volunteers managed to plant 6 million seedlings by hand — an admirable effort but simply too slow to make a difference at the scale required. That’s when Dendra Systems, a drone-based forest restoration company, got involved. With the help of modern avionics and automation, the campaign managed to plant an additional 4 million mangrove seedlings in 2019 alone. The company estimates that a pair of operators flying ten drones could plant as many as 400,000 trees per day.

“The human species has been very good at building tools to do deforestation at an industrial scale,” Jeremie Leonard, an engineer with Dendra Systems, told Engadget. “And, for a long time, the state of the arts in ecosystem restoration was hand planting. So we’re trying to give restoration a toolset to be able to do that at the largest scale.”

For Dendra, that toolset includes two types of modified commercial-grade autonomous aerial drone platforms, a visual AI, a machine learning algorithm for establishing seeding patterns, and a custom built seed-spitter that fires marble-sized pods packed with baby trees and all the nutrients they need to get growing. Since the company’s founding in 2014, it has completed nearly 40 contracts in 11 nations, largely working with resource extraction companies to repair landscapes after the completion of mining and forestry activity.

The company’s fourfold restoration process starts with an in-depth aerial survey of the acreage to be reclaimed, looking at “the terrain, the topology, the nutrients, the biodiversity,” founder Lauren Fletcher said during a 2017 Ted Talk, as well as slope, soil type and moisture. Dendra’s largest mapping drone can carry up to 22 kilograms of equipment and its sensors can resolve images at 2-3cm per pixel. “The idea of going bigger for the purpose of mapping really is to carry in bigger sensors that will provide more in depth information,” Leonard said. Currently, Dendra employs a combination of Wingtra and DJI M600 drones for surveys as well as a custom Vulcan UAV for the seed spreading however much of the equipment they’re laden with has yet to be made available commercially.

“We currently have flights that can last up to two hours and cover several hundreds of hectares in a day,” he continued, though the company has much grander aspirations than what a single drone can cover in two hours. “We want to scale up our efforts, our technology makes sense at scale. It’s not enough to map someone’s garden and reclaim their begonias — it is to go in and map and replant an entire coastline.” 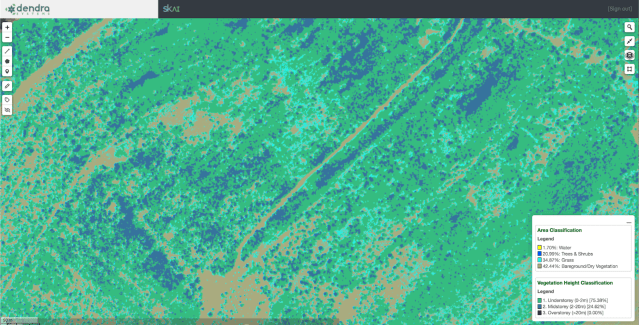 “Both on the mapping and the seeding side, we’re moving towards operations of multiple UAVs guided by a single pilot,” Leonard explained. “So the human operator is necessary for high level tasks of coordination more than piloting directly.”

Once the survey has been completed, the collected data is analyzed based on what their contract requires — it could be spotting invasive weeds or identifying potential erosion and landslide zones. Currently, a team of human data ecologists are responsible for tagging, annotating and analyzing this data but Dendra is developing a visual recognition AI to accelerate that process. “We can detect a few dozen species at the moment, manually,” Leonard said. “Probably half that can be automated.” 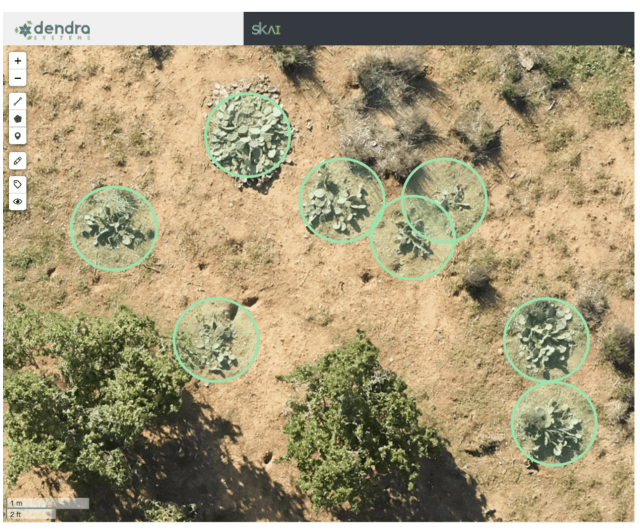 The survey data is also fed into a machine learning algorithm that uses it to configure a flightpath for the seeding drone to follow as it disperses its vegetative cargo. “Everything’s automated, we do [a level of] precision that the human pilot cannot provide,” he noted. A human operator is still on hand, of course, to provide oversight and step in if necessary.

“We’ve got an aerial feeding system, it has been called a sky tractor, so that we can get into those hard to reach places,” Susan Graham, Dendra’s chief executive officer and co-founder, told Bloomberg in September. “It’s much more efficient to be flying over the ground than walking over it.”

The seeding drone hovers about 2 meters off the ground and, following the predetermined flight path, pumps its capacity of 150 seed pods at a rate of about one per second onto — and into — the ground, depending on the soil conditions and type of tree being planted. In Australia, for example, the company employs a mix of trees, grass, and bush species and simply spreads them onto the surface where they’ll germinate naturally. In Myanmar, on the other hand, mangrove seeds need to be shot with more force to embed them the necessary number of centimeters into soft wet soil. 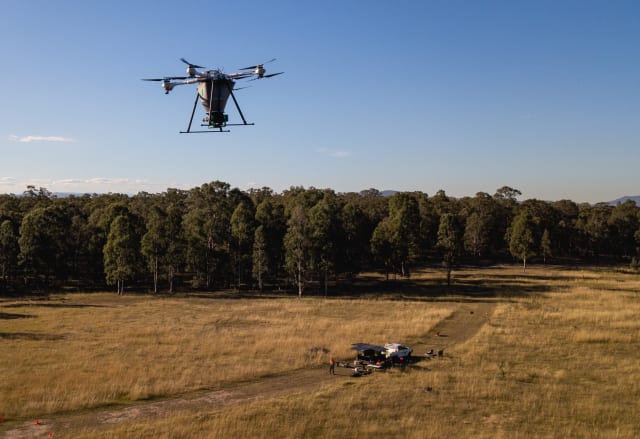 The goal is not to create a massive monoculture of just one type of plant, Leonard notes, so the seed drones are built to simultaneously spread a variety of different plant types. “If you see if you start going into monoculture, it becomes agricultural,” Leonard said. “It’s not system restoration.”

Leonard hopes the company can leverage its current momentum and “really put a dent in climate change.”

“I think the big next step for us is going to be the carbon world,” he concluded. “We are currently putting resources in developing tools that allow us to properly quantify carbon sequestration, because it’s still a subject that still is quite theoretical at the moment. Then we can also develop the technology to replant ecosystems, which are going to be extremely good at capturing carbon.”