True to form, Dief is keeping some of the details close to their chest. For starters, there’s no word on which platforms the series will hit, aside from Steam, where it’s now available for wishlisting. Plus, they don’t describe We Are OFK as a specific type of game, but rather more broadly, as an “interactive series.” It’ll be released in five episodes over five weeks, and there will be a new OFK song in each episode.

“It will play like an interactive TV series, with some extra playable dimension and treats tossed in,” Dief told Engadget. 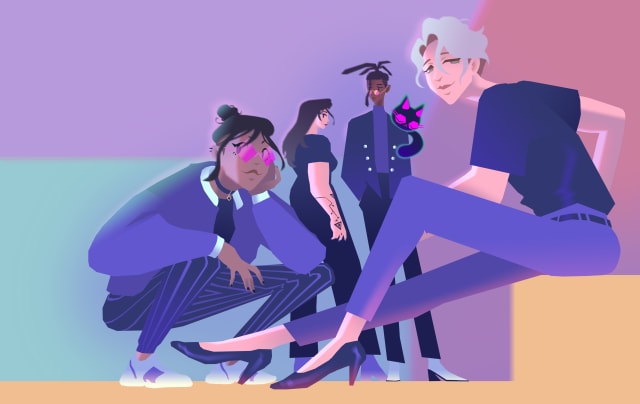 The fictional members of OFK are producer Jey Zhang, vocalist Luca Le Fae, pianist Itsumi Saito, and visual artist Carter Flores, and they all graced the virtual stage of The Game Awards for their debut performance. Jey and Itsumi use she/her pronouns, while Luca goes by he/him, and Carter uses they/them.

“The thing we’d like to convey with Luca’s shirt is that Black trans lives matter,” Dief said. “This is what each member of our team and each of our band members knows to be true. To say it on-stage at The Game Awards is doing so in solidarity with the many who also know this to be true, and in remembrance of the family and friends we have lost to violence towards Black, trans and Black trans people.”