Having a screen that swivels from portrait to landscape on a phone isn’t entirely new. Long before foldable phones and dual-screen phones became a thing, there were feature phones predominantly in Asia that came with this type of screen — albeit a tiny one with a 4:3 aspect ratio — to serve markets that offered mobile digital TV services, such as South Korea’s DMB (Digital Multimedia Broadcasting) and Japan’s 1seg. You’d hold onto the main body (remember those keypads?) in portrait, then rotate the screen to landscape and watch live TV on the go.

In the case of the LG Wing, it has a 6.8-inch P-OLED screen that swivels in a clockwise direction to landscape mode (aka Swivel Mode), in which it reveals a smaller 3.9-inch screen below. On paper, that’s great for my use case: I can fully utilize that vibrant 2,460 x 1,080 display for watching video, while simultaneously fueling my social media addiction using the smaller 1,080 x 1,240 panel. 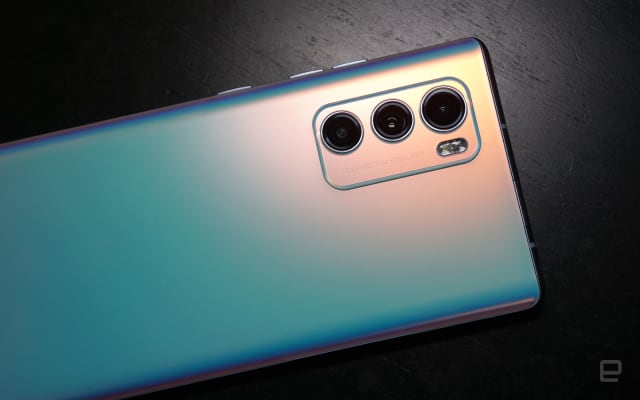 With the main screen closed, the LG Wing looks like any other flagship smartphone, save for its extra thickness — about 2.8mm more than the Galaxy Note 20 Ultra and the iPhone 11 Pro Max. It also happens to be a good-looking phone, especially with the chic “Illusion Sky” gradient finish underneath the frosted glass on my unit. The weight, though, is more noticeable — an extra 56 g or almost two ounces compared to the Galaxy Note 20 Ultra. To put things into perspective, though, this is still lighter and slimmer than the Dual Screen-equipped Velvet.

While there’s a knack to it, it didn’t take long to find the sweet spot for pushing the Wing’s main screen up. It’s located at almost two-thirds the way down the right side, and with my right thumb, it’s just a slight horizontal push before the spring mechanism takes over. As the screen rotation reaches its final 15 degrees, a hydraulic damper kicks in to slow it down. To retract the screen, I simply push the top-left corner down until the spring takes over in the last 15 degrees. 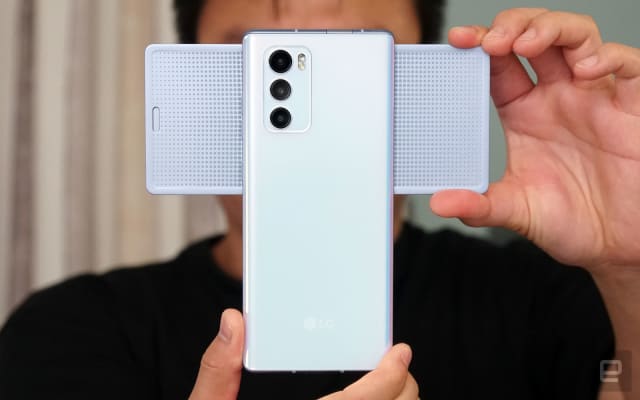 Once I got the hang of it, it did feel like playing with a large fidget toy made for one’s right hand. Even as I was typing up this article, I couldn’t help but occasionally fiddle with the swivel screen while procrastinating. There was just something really satisfying about swinging and clicking this spring-loaded screen. As a bonus, you’d naturally want to show off this unique form factor to other people. That said, LG says the hinge will eventually show its age after 200,000 swivels, and while 30 swivels a day would translate to over 18 years of usage, it would still be wise to resist the temptation.

Despite this being a pre-production unit, the software felt well-polished. With the exception of apps that lack landscape mode, I didn’t have any issue with jumping between normal mode and Swivel Mode — something I tended to do while using YouTube or Google Maps. Sometimes the software interface did take almost two seconds to rotate when in Swivel Mode, though I’m not sure if LG can do anything about this — and now I’m nitpicking. 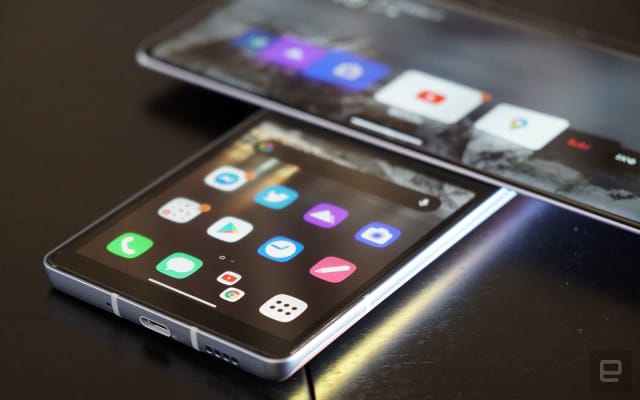 Much like LG’s recent dual-screen phones, you can create multi-app shortcuts on the Wing. These can be found on the second lower screen, and they let you simultaneously launch two pre-selected apps with a single tap. The combos that I often use have YouTube running on the horizontal main screen, with Facebook, Twitter or Chrome on the bottom display. That said, sometimes I’d just put the second screen to sleep (using “Grip Lock” in the pull drawer), and simply use the phone’s body as a more comfortable grip while watching videos on the landscape main screen. 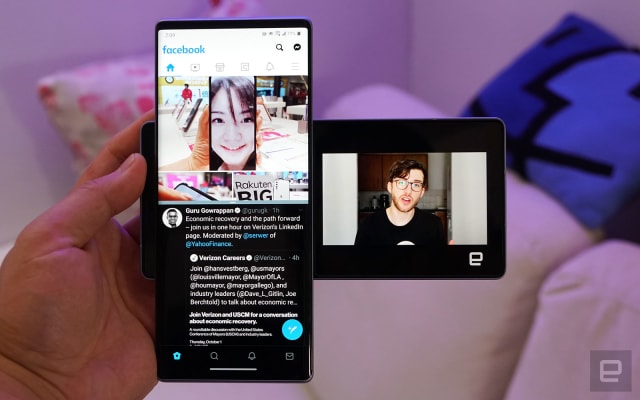 It’s worth pointing out that even in Swivel Mode, you can hold this T-shaped phone in any orientation you want, so you can still use the main screen in portrait, with the second screen sticking out on either the left or right side (with the phone’s rotation lock disabled first, of course). For this, I made extra multi-app shortcuts with some of the aforementioned apps set in reverse order. And if I really wanted to, I could run a third app on the main screen as well using the multi-window mode. In all cases, the Qualcomm Snapdragon 765G processor kept the multi apps running smoothly.

Some apps can even be extended to both screens on the Wing. The Gallery app can show an image or clip on the large screen while featuring the camera gallery on the second screen. This is great for showing your shots to family and friends around you, as your fingers won’t block their view. On a related note, when you edit a video clip from the Gallery app, the editing tools stay on the second screen so that they don’t get in the way of your masterpiece. 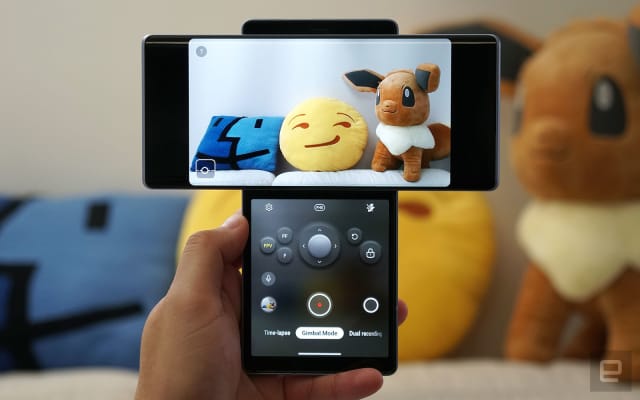 The camera app goes one step further by reserving two special modes for the Wing’s Swivel Mode. First of all, Gimbal Mode uses digital cropping and electronic stabilization to mimic the smooth panning motion of a mechanical handheld gimbal, and this is all done via the Wing’s 12-megapixel Ultra Wide Big Pixel camera. There’s a virtual joystick on the second screen for panning or tilting the “camera” (the actual camera on the back doesn’t move, obviously) which, to be frank, seems a little gimmicky, but the three stabilization options offered here do come in handy — you’ll most likely be using First Person View mode if you’re jogging or hiking, for instance.

The second camera mode that uses both screens is Dual Recording. Much like Nokia’s “bothies” feature, this captures footage from both the 32-megapixel pop-up selfie camera and the 12-megapixel rear camera at the same time. You can pick either a split view output or have a picture-in-picture format, both of which may make fun videos when we get to travel again. 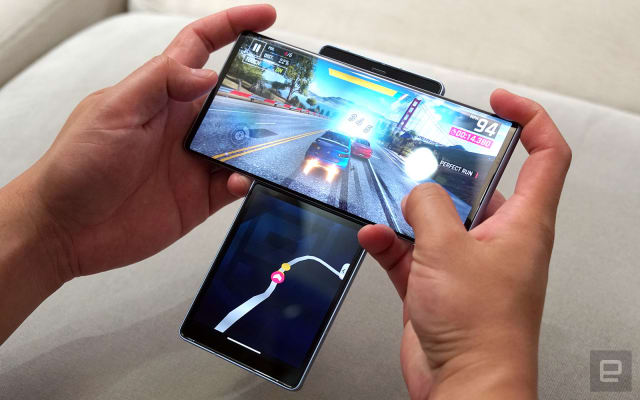 LG also worked with some third-party developers to get more apps to run on both screens on the Wing. YouTube offers video control buttons on the second screen. Then there’s Naver’s Whale web browser which automatically “beams” any video embed on your current webpage to the main screen, while you continue to browse on the second screen. Gameloft also tweaked its racing game Asphalt 9: Legends for the Wing, in order to use the second screen to show the map — a feature already made available on the TwinView Docks for ASUS’ ROG Phones.

The only real pain point that I came across in Swivel Mode was when it came to typing. When I wanted to do that with the top app, the keyboard would pop up on the top screen, which made for an awkward typing experience with a keyboard stretched wide. I originally assumed that the second screen would serve as the keyboard instead for easier typing, but that wasn’t the case. Which would you prefer? Make the keyboard always show up on the active screen, or to make it show up on the second screen for easier typing? LG should at least give us both options to cover all grounds.

Another issue that I came across — and one that I hate to admit — happened during a recent ferry ride. The phone managed to slip out of my pocket and dropped on the floor. While my unit was wearing the bundled hard case at the time, that only covered the main body and left the slim swivel screen fully exposed. As a result, my phone picked up light scratches at the two top corners of the main screen, along with a small dent near the earpiece. I can’t imagine what kind of damage the Wing would take if I had dropped it while in Swivel Mode. But the good news is that despite the presence of the swivel hinge, LG still managed to obtain an IP54 rating for dust and water resistance here. 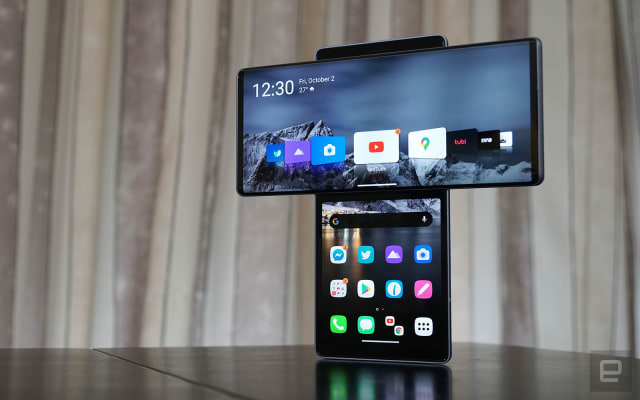 For me, the Wing is fine as it is in terms of dual-screen usability, though it’d be nice to have a slightly taller second screen if LG ever plans on making a Wing 2. And maybe it could shed a few grams as well. For now, the Wing sits comfortably between conventional smartphones and foldable dual-screen phones, allowing practical dual-screen use cases while keeping its size and weight to a new minimum in this class. Even for a multi-tasking nerd such as myself, LG proved with this weird phone that I don’t need two full-size screens — and I certainly don’t need a flexible display (yet).