OnePlus expands its Nord line with two even cheaper phones

The Nord N10 5G (£329/~$430) is the more capable of the company’s new budget phones, and packs Qualcomm’s new Snapdragon 690 chipset with 6GB of RAM and 128GB of storage. While it’s outgunned by the more common Snapdragon 765, the 690 is Qualcomm’s most affordable sub-6 5G-capable chipset and should certainly give the competition’s mid-range smartphone chips a run for their money.

That chipset also gives the Nord N10 5G the ability to run a high-refresh rate display — in this case, a 6.49-inch Full HD screen that refreshes at 90Hz like the original Nord. And the similarities don’t end there: The Nord N10 5G also packs a quartet of rear cameras, though OnePlus didn’t just transplant the original Nord’s cameras into a new body. The N10’s 64-megapixel main camera will likely see the most use, followed by an ultra-wide camera with a 119-degree field of view. The last two cameras are considerably less conventional — one is a dedicated macro camera, and the other shoots solely in black and white.

Rounding out the N10 package are a 4,300mAh battery, dual speakers for stereo audio, support for OnePlus’s Warp Charge 30T fast charging, a rear-mounted fingerprint sensor and Android 11 (albeit painted over with the company’s OxygenOS 10.5 skin). 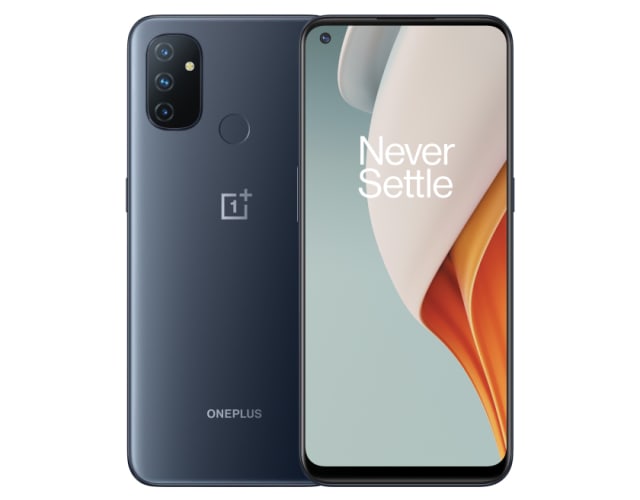 The Nord N100 is surprisingly good-looking, considering the price.

While the N10 seeks to fill the space just below the already-released Nord, OnePlus’s N100 (179/~$234) is aimed at the sort of budget shoppers brands like Motorola typically cater to. The standout features here include a 6.52-inch HD+ display and a 5,000mAh battery, along with a peculiar rear camera setup.

The primary 13-megapixel camera is the main draw, but it’s joined by secondary cameras that pitch in for bokeh-filled portraits and super-tight macro shots. Meanwhile, the rest of the N100’s internals are a bit more pedestrian: It uses one of Qualcomm’s relatively new Snapdragon 460 chipsets, paired with 4GB of RAM and 64GB of internal storage. (Contrary to reports that circulated before today’s announcement, the N100 also accepts microSD cards.)

More competition in the mid-range is always welcome, but it remains to be seen if OnePlus’s decision to go down-market will pay off. Early on, OnePlus built its brand around the idea that it made “flagship killers” — devices that ran as fast as premium offerings, but without the sky-high price tags. Now that OnePlus is embracing the idea of playing at every level of the market, it runs the risk of muddying that appealing message.

Then again, the potential upsides here are significant. Well before returning to the flagship smartphone space with its Edge+, Motorola clawed its way into profitability purely on the strength of its low-cost offerings. Without knowing anything about the carrier arrangements OnePlus may or may not have lined up, it’s tough to imagine OnePlus reaching similar levels of success. With the right deals in place, though, the company may just find itself carving out the kind of successful niche that other affordable phone makers simply haven’t been able to.

Apple's next-gen AirPods Pro might not have their iconic stem

Facebook is rolling out a free cloud gaming service