Pixel 4a 5G review: Good, but you can do even better

Most of the new camera features are in the software, which is where Google tends to shine. The company was the first to launch an effective low light mode when it debuted Night Sight on the Pixel 3 back in 2018. Since then, Google said it’s found the feature so good at improving pictures in dim conditions that it’s doing away with the automatic flash tool altogether. Don’t worry, you’ll still have an LED flash and selfie screen light if you still want that extra illumination in the dark. But you’ll have to manually turn on the flash instead of letting the phone determine when to use it.

Instead, when it thinks there’s not enough light in your shot, the Pixel 4a 5G automatically activates Night Sight. You’ll see the crescent moon symbol on the shutter button, which indicates the mode is on, and you’ll have to hold your phone steady for the few seconds it takes to get the shot. This works in portrait mode as well.

Whether you find this feature useful depends on how much you liked Night Sight in the first place. If you were never into it, you’ll hate that it kicks in by default, but at least you can turn it off. It’s a little annoying if you weren’t expecting it, especially since you’ll need to keep still for a few seconds more to capture a photo in Night Sight. But by and large the pictures came out nicely, and I remain as impressed by Google’s processing software as ever.

Another new software feature is a group of stabilization modes for video recording. You’ll now find options for Standard, Locked, Active and Cinematic pan as opposed to just one standard option in the earlier models. Standard and Active are fairly common, and you might not even notice a significant difference between them. I filmed some cars and pedestrians at a busy intersection and though the footage was decently steady, I didn’t notice a major difference. Locked mode let me frame up a specific area, then kept my subject in the center despite small camera movements due to hand shake. It’s useful for keeping tight focus on a stationary object, but I don’t see myself using it much.

The real showstopper is a new cinematic pan mode. This slows the footage down to half the speed and mutes the audio, shooting at twice the framerate for a much smoother scene that has an almost slow-motion quality. I pointed my phone at autumnal foliage in Prospect Park as my cab drove by, and the resulting 1080p clips were impressively smooth. The fact that they were slowed down also made them easier to watch. My Instagram viewers probably appreciated that the clips were less nausea-inducing.

As much as I like cinematic pan, my favorite new camera feature is actually portrait light since it’s not always easy to get flattering illumination for my selfies. But Google’s latest feature means that I might be able to get good portraits even in suboptimal conditions. You don’t have to do anything to enable this feature; as long as you shoot in Portrait mode with the front camera, you’ll be able to edit the photo afterward, moving a faux light source around. This is fairly similar to what the iPhone and Huawei phones already offer, although they provide a greater variety of spotlight options. Apple’s mode doesn’t give you as much control over where the light shines on your face, though. 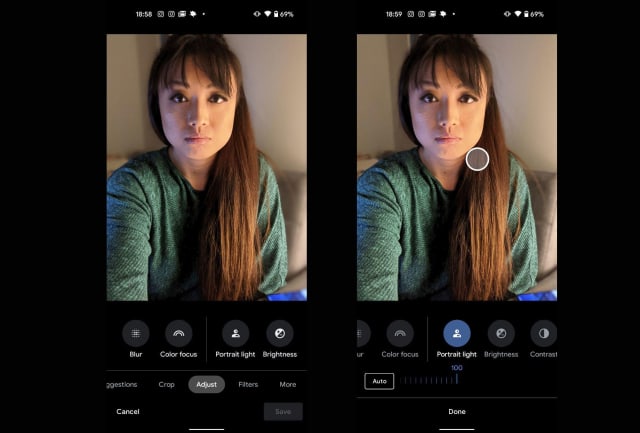 I was hopeful that Google’s tool might save pictures taken in tricky lighting, but it wasn’t the miracle I was expecting. This was only designed to offer smaller-scale, targeted tweaks. I took a selfie in a backlit setting with uneven overhead light, and when I edited the photo afterwards, I dragged a circle around to cast some brightness on my face. I only really saw a difference when I dragged the intensity up past 80 percent, and managed to get rid of some shadows on my left cheek.

Speaking of editing pictures, I like how much easier to use the new Photos editor is. Google rolled out this updated editor earlier this month, and it gives you more precise control over settings like Brightness, Contrast, Highlights, Shadows and more. The 4a 5G’s camera app also features some interface changes, and I appreciate that modes like Time Lapse and Slow Motion are no longer buried in the More section. Instead, you’ll find them right above the shutter button when you go to take a video. It’s also easier to share a photo you just took now — you can swipe in from the thumbnail next to the shutter and pick one of four suggested apps.

One of my favorite things about Google’s phones over other Android handsets is the Pixel-first software experience. With the Pixel 3, for example, the company introduced helpful AI-assisted tools like Call Screening and Duplex for restaurant reservations. Since then, Pixels have been the first phones to get things like Live Caption, What’s Playing and Night Sight. Sometimes, these features are even exclusive to Google’s hardware. 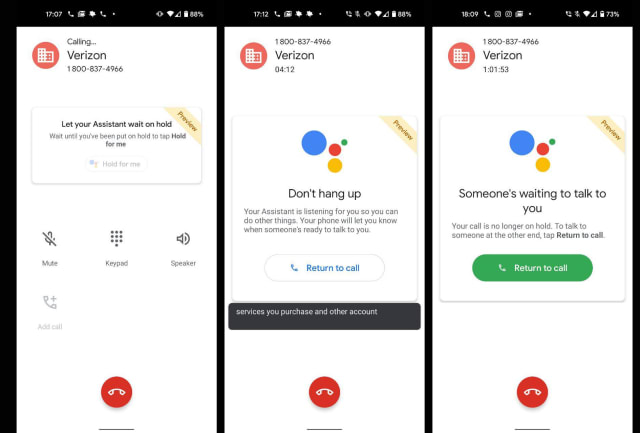 This year, Google is introducing a Hold For Me service on the Pixel 4a 5G and 5 that lets Assistant stay on the line on your behalf when you’re put on hold. When it’s finally your turn to speak with a person, the Assistant will tell the agent that you’re using the service and that you’ll be right back. It’ll send you an alert that you’ve been connected, and your phone will ring, too, in case you’ve wandered away from your table.

In the short time since I’ve had the Pixel 4a 5G, I thankfully haven’t had real reason to make calls to actual customer service agents, so I’ve tried this once with a Verizon Fios helpline and again with the hotline Google set up for reviews. (I felt bad doing more tests and wasting the time of customer service reps.)

You have to first enable Hold For Me in the phone’s settings, then make your call. Once the line connects, a button appears on the screen so you can get the Assistant to take over and hold for you when you’re ready. After answering a series of questions through Verizon’s automated help system, I was placed on hold. I tapped Assistant in, and a card appeared on the screen telling me not to hang up. It also offered an option to “Return to call” in case I wanted to confirm that I was still on hold, and muted the hold music, which was nice. Google’s Live Caption feature also kicked in to show me what was being said on the call, which was mostly a loop of “Our customer service agents are currently busy, please remain on the line for the next available representative.”

I returned my attention to my work and actually forgot I was still on hold until an hour later, when the 4a 5G rang loudly and told me onscreen that a support agent was ready for me. When I rejoined the call (which took awhile since I had to first mute the music on my smart speaker), the rep on the other end was introducing themself. They told me that the Assistant had told them I was using a Google service and to wait for me to get back.

I appreciate the freedom of being able to play my music while on hold instead of having to listen to whatever is on the line, and not having to be surprised every time a recorded “please remain on the line” message is played. But I didn’t find Hold For Me truly liberating since I still knew in the back of my mind that I needed to be ready to speak with a service representative at any moment. I’d also need to learn to trust Assistant more before I can feel comfortable walking away from my phone while it stays on the line for me. 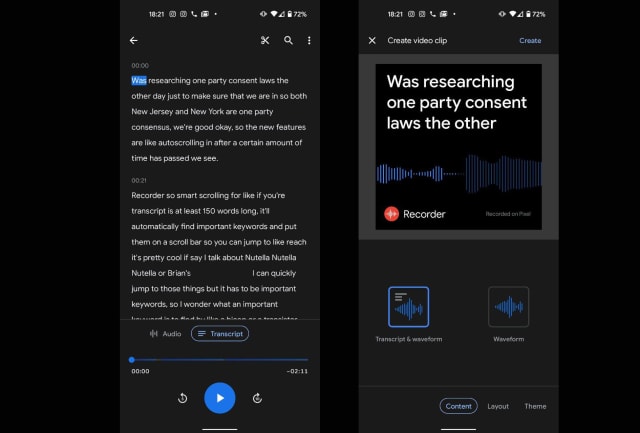 Another Pixel-exclusive feature I’ve loved is the Recorder app that debuted on the Pixel 4. I’ve used it mostly for interviews as a more-secure alternative to the AI transcription service I’d normally use. With the latest Pixels, Google is rolling out version 2 of the app, which offers useful new features like a keyword-pegged scroll bar, a video generator for your soundbites and audio editing so you can trim out specific clips.

I’m an oversharer, so I love that video tool. You can trim your audio file to the exact length you want, then create a shareable clip. Google will display an animated waveform and you can choose to add the subtitles to it. There are some basic templates, including square, portrait or landscape orientations and light or dark themes.

Not only is this a great format for sharing audio snippets to video-first platforms like YouTube or Instagram, but it’s also a way to be more inclusive, especially of people who are hard of hearing or deaf. I can already see this tool replacing Headliner as my main means of creating quick clips for social media to promote highlights from the Engadget Podcast.

With the Pixel 4a 5G, Google is also adding a new Assistant Snapshot page to the Feed so that when you swipe to the left of your home screen, you’ll see more than just suggested news articles. You can also get your upcoming calendar events, weather reports and commuter info (remember commutes?). I liked the way Microsoft implemented this on the Surface Duo, which pulls in more info like recent checklists from the To Do app, and displays it all on the same page as the articles. Google takes a different approach, hiding your Snapshot in a separate panel that you have to tap a button at the top left of your Feed to access. This could be a useful feature, but I wish the Pixel integrated it better.

Read More: Pixel 4a 5G review: Good, but you can do even better

Microsoft’s AI is now better at image captioning than humans