The PS5’s size may not be its most exciting feature, considering it has a 10.28-teraflop GPU and a custom 825GB SSD, but that’s basically all we’re allowed to talk about right now. Similar to Microsoft’s Xbox Series X previews, Sony has laid out coverage restrictions before the launch of the PS5 and the Digital Edition on November 12th. So, today we’re only going to discuss how the console looks with the power off, and how the new DualSense controller performs in one segment of one demo game.

First up, let’s look at how this monster will fit in most media centers. 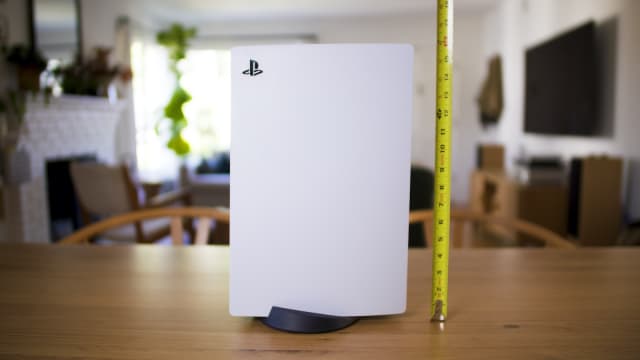 The bulk of the beast

Not only is the PS5 physically imposing, but it’s heavy, too. With the display plate attached, the console weighs 10.2 pounds, according to my bathroom scale. The Series X, meanwhile, weighs 9.2 pounds on the same scale, which isn’t a huge difference. However, this is where the industrial design of each console really comes into play: The Series X is a solid box, 11.8 inches tall and about 6 inches wide on all sides, and its weight feels evenly distributed within that package. I’ve never worried about dropping the Series X while moving it between rooms.

The PS5, on the other hand, is difficult to handle. Its length naturally makes its weight unwieldy, and it feels like a bad idea to grab the console by those white fins, so picking it up always seems like a gamble. Luckily, the PS5 isn’t a mobile device. Once you figure out where the console will live in your house, you probably won’t have to move it around, making the weight a relative non-issue. 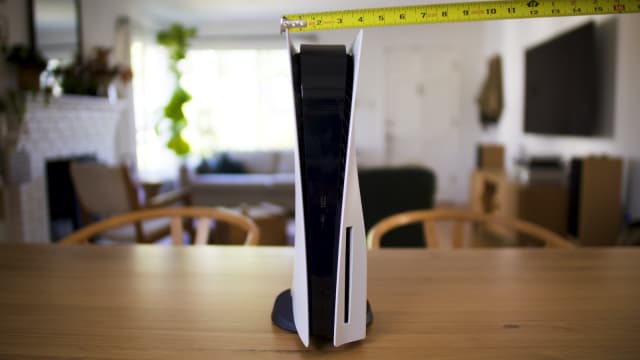 One thing that will definitely be an issue, or at least a consideration, is that display stand. The PS5 comes with a black plastic plate designed to hold the base of the console when it’s standing upright or to prop it up when it’s resting horizontally, disc drive down. It essentially makes the PS5 float. Considering the heft of the console, this extra support is welcome, and the display plate definitely makes everything feel more secure.

It’s also the most annoying aspect of the PS5 set-up process. When I saw the plate tucked into the box, my excitement for the new console dimmed, realizing I’d have to figure out some sort of accessory puzzle before actually booting everything up.