In 2018 Roland introduced the TR-8S drum machine and instantly won the heart of my colleague Roberto Baldwin. Then, last year it resurrected its MC line of grooveboxes, and launched the portable, battery powered MC-101. My fellow editor James Trew walked away impressed as well. It would only make sense then, that at some point the famed builder would try to combine its new super portable formfactor, with its drum-focused expertise. Enter the TR-6S. On the inside, it’s almost exactly the same as the 8S but outside, it’s impressively tiny.

In short: This AA-powered box packs professional-grade drum sounds in something about the size of a Song of Ice and Fire paperback. But, that also means a lot of compromises were made on the interface. And, while the $400 pricetag is certainly reasonable, there are plenty of solid drum machines to be had at lower prices.

Let’s start by looking at what you’re giving up by opting for the portable TR-6S, over its studio-bound big brother the TR-8S — mostly controls and I/O ports. The 6S has six tracks, compared to 11 on the 8S. And, unlike the flagship drum machine, there’s no way to directly sample sounds on the 6S. You can import samples from an SD card, but you can’t plug in a microphone and record yourself banging on pots and pans to create a custom drum kit. While the space constraints make it clear why this feature was cut, I’d argue it’s something far more useful on a portable device. If I’m in my studio, I have a laptop where I can do fine grained audio editing before loading a sample on an instrument. If I’m sitting in the park and feel inspired by the sounds of a nearby basketball game, though, I’d need a load of extra gear to convert that into music. 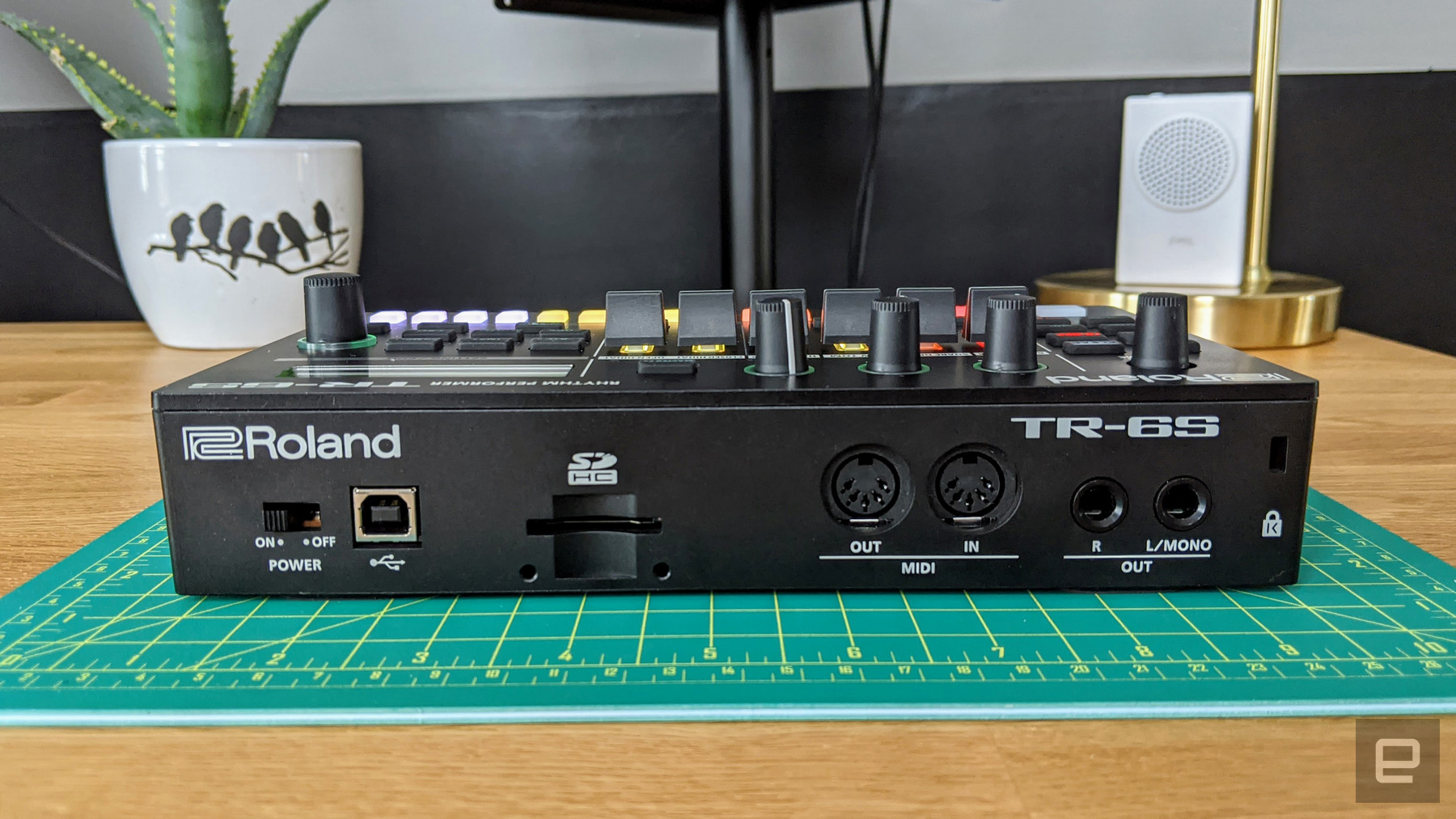 Less of an issue, for me personally, is the lack of separate outputs for individual tracks. In a professional setting, with a large mixing board this might be a deal breaker. But, the stereo outs on the 6S should be fine for your average bedroom producer. Plus, it has a 3.5mm headphone jack on the front, which is far more useful for making music on the go than the standard ¼-inch jack on the back.

The biggest tradeoff here, though, is the controls. While you do get a volume slider for each track, they all share the same three knobs. There’s tuning, decay and an assignable “CTRL” knob, that affect whatever track you’ve selected. But when nothing is selected they control the reverb, delay and master FX sends. Then there’s a single “value” encoder on the right that is used to navigate menus and change parameters in them. And, while there are plenty of buttons, including one for each step on the 16-step sequencer, they all have secondary (and in some cases third) functions, depending on what mode or menu you’re in.

Part of what made the TR-8S so impressive was its vast array of sounds and flexible audio manipulation tools. But trying to put all those options in just a handful of controls leads to a lot of menu diving. If you never use any of the advanced features, and just plan on pulling up one of the preset drum kits and building simple 16-step patterns, this isn’t an issue. But if you want to create variation and fills, or do serious sound design, the 6S is a legitimate headache.

Even after reading the manual — twice — I still frequently found myself stuck trying to figure out simple things, like how to program a custom drum fill. Turns out, you need to hold the TR-REC button, which brings up the pattern variations menu. But, rather than press one of the lit buttons to select a variation, you need to use the value knob to scroll all the way through the eight pattern variations labeled A through H, to a pair of variations not on the front panel labeled “1’ and “2”. Turns out, these are fill 1 and fill 2. Intuitive, this is not.

Condensing all the options available to just a single value knob also means that you’re frequently scrolling through endless lists of parameters — around 30 for each track. Some of those parameters are available on the front panel, but it’s not always obvious. 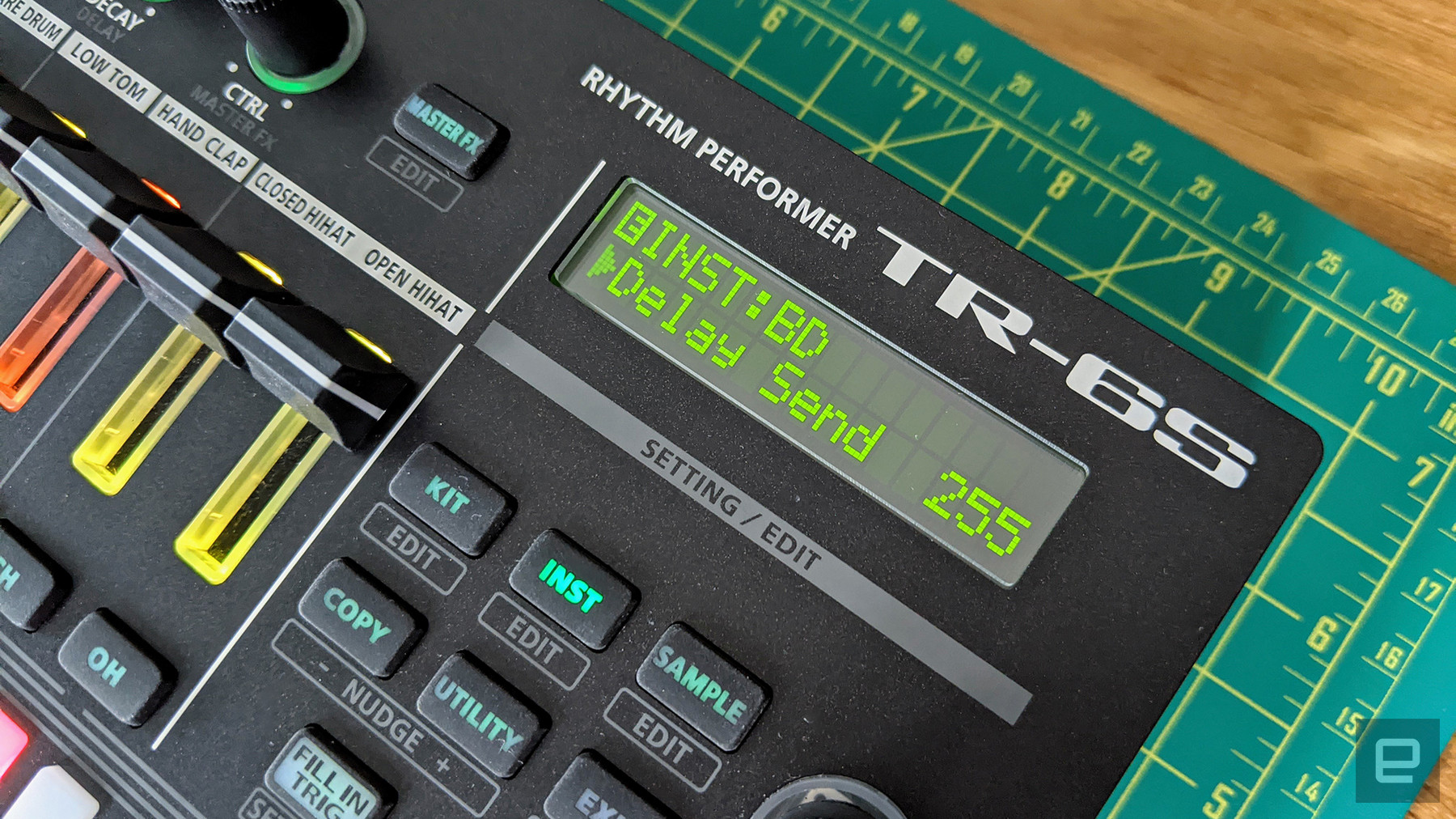 There are also some questionable default settings: like having the bass drum going to the reverb and delay sends and having Motion (automation recording) off. And it’s far too easy to overwrite one of the preset kits. Basically, make sure you load up a blank kit before choosing your drum sounds, otherwise you might accidentally replace that dope 808 kit. Trust me, I’ve done it like 13 times so far.

While I started by pointing out a lot of its downsides, and I’m not going to pretend I love the Roland workflow, there is plenty to like about the TR-6S. Especially if you’re into dance music. For one, it just sounds phenomenal. There are sampled drums on here, and you can load your own, and that’s great. It means that, ultimately, the TR-6S can sound like whatever you want it to. Build a kit out of snapping twigs and dead leaves being crushed under foot (I did that this past weekend), or load up synth sounds and program melodies. (Though, I want to be clear: building melodic lines on this is not fun or easy.)

All of Garmin's Fenix 6 smartwatches are $150 off at Wellbots