Squadrons, however, doesn’t fall into either of these buckets. Instead, it sits in the same one occupied by Resident Evil VII and, arguably, a smattering of smaller titles like Tetris Effect and Superhot. These are games that can be recommended regardless of whether the end-user owns a VR headset. You might prefer one playstyle (I know plenty of people who believe PSVR is the best way to experience Resident Evil VII) but neither version is inherently inferior. It’s a difficult balancing act that simply isn’t possible for some game concepts and genres. You couldn’t make a VR version of FIFA 21, for instance, without changing some of its on-the-pitch fundamentals.

A game like Squadrons has that potential, though. Catering to both playstyles has dramatically increased the game’s reach. That, in turn, has allowed EA to be more aggressive on the price — which could increase the player base even further — and raise its production values. And while the eight-hour campaign isn’t the longest, it’s perfectly respectable by VR standards. Combined with the multiplayer suite, it’s an attractive proposition for any Star Wars fan, regardless of how you like to play.

To pull this off, though, developer Motive Studios had to make and lean into a very specific type of game.

Unlike Battlefront II, for instance, there’s no option to move the camera behind the ship. You’re always stuck inside the cockpit, peering out through virtual sheets of angled glass. Before picking up the game, I was worried about this design decision. I’ve dabbled with the first-person perspective in racers like Gran Turismo Sport and Wipeout Omega Collection, but always switch back to an exterior camera angle because I don’t like having my vision obscured when I’m trying to set a fast lap time.

I feared that Squadrons would feel similarly restrictive and limit my ability to see what’s happening around me. And those fears were justified, to an extent. Some of the screen is always taken up by fictional computers, making it tougher to keep track of fast-moving enemies. But I didn’t mind the perspective this time. In fact, I relished it. That’s partly because my interest in starship interiors vastly exceeds hypercar cabins. I’ve always dreamed of sitting inside an X-wing and its various controls have been etched in my brain since I first watched A New Hope. Seeing them all on screen, beeping and flickering, is satisfying on its own. 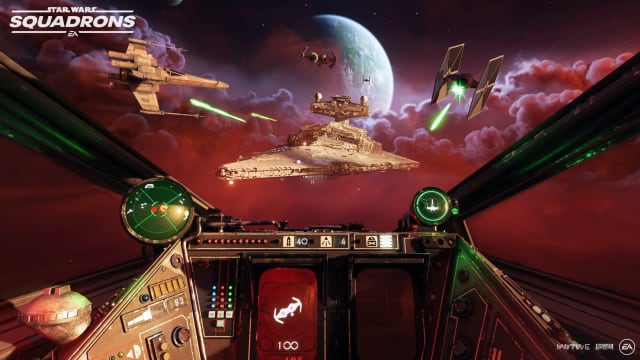 That child-like joy transcends platforms. If you’re wearing a VR headset, it’s marvelous fun to stare at your legs — which are covered in orange or black overalls, depending on the side you’re fighting for — or quickly glance left and see what’s rushing past your window. But the experience is just as compelling on a TV or PC monitor. Every time you step into a new ship, you’ll want to spend a good five minutes just admiring the detail that’s gone into the seat, windows, switches and readouts.

The instrumentation isn’t just for show, either — it’s the game’s primary HUD. Some instruments explain how the ship’s power is being distributed. Others represent the throttle and how much boost you have left. And there are always one or two that display the ship’s structural integrity and, if you’re lucky enough to have them, the strength and placement of its shields. Each interior also has a virtual screen that confirms what ally, enemy or defence system you’re currently tracking in outer space.

As a result, these controls never feel like a nuisance or something you’re supposed to mentally block out. Instead, they’re meant to be glanced at. And during your first few missions, you’ll be looking at them a lot, regardless of how you’re playing.

The instrumentation isn’t just for show.

Pushing a ship around in space is simple enough: If you’re using a controller, the left stick adjusts your speed (up and down) and rolls the ship (left and right) horizontally, while the right stick changes your general direction. But each ship has a ‘half-throttle,’ which is highlighted with a larger segment in the acceleration readout, that lets you turn a little righter. In the heat of battle, you’ll also need to change between movement, attack and defence-optimized powers profiles, which are triggered with a button press and visualised with blue, red and green bars on the dashboard.

Motive could have made an alternative HUD that worked with an exterior camera angle. But it didn’t. Instead, the company focused on a form of visualization that feels intuitive whether you’re staring at a TV or the insides of an Oculus Rift.

There’s a lot to keep track of inside the cockpit. Thankfully, most story missions start with a slow ‘follow the leader’ section that lets you experiment with the basic controls. Soon enough, though, you’ll be shooting at enemies with a mixture of cannon fire and special weaponry that, if you’re using a controller, are mapped to the bumpers. The game will then introduce attack-nullifying countermeasures and advanced techniques such as boost-fueled drifting and custom ship loadouts.

Squadrons’ combat is frantic and consistently fun, with a good variety of ship types that require slightly different strategies to take down. If you’re up against a lot of New Republic cruisers, you’ll probably want a TIE Bomber because it has plenty of armour and weapon options, such as a Sienar Team Cannon, that can pierce heavier defences. Dogfights can occasionally devolve into frustrating merry-go-rounds — the kind where you’re twisting and turning as fast as you can, but your opponent is doing the same and no-one can actually line up a shot — but for the most part, it’s easy enough to track down and vanquish your foes.

The missions are tied together by a story that’s presented in a VR-friendly way. You embody two pilots that fight for the heroic Vanguard and sinister Titan squadrons respectively. The prologue takes place during the original Star Wars trilogy but the rest of the campaign is set between Return of the Jedi and The Force Awakens. Just like the story from Battlefront II, it explores a New Republic that’s slowly growing in confidence and a weakened Empire trying to bounce back after the loss of its leader, Emperor Palpatine. 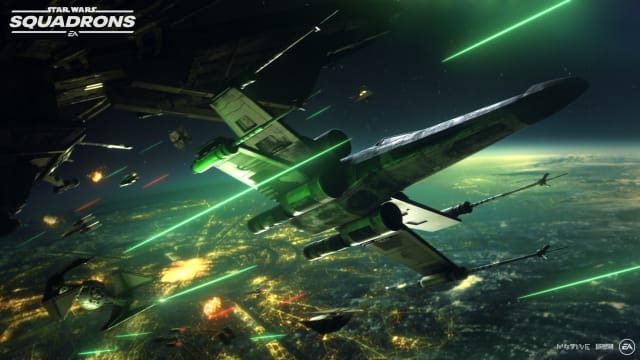 There are 14 missions in total that flip-flop between the Titan and Vanguard squad’s perspective. Before each mission, you’re allowed to explore your faction’s hangar, talk to comrades and finally receive a hologram-assisted briefing from your commander. You can’t move around like a traditional first-person game, though. Instead, you have to move an on-screen cursor and jump between designated points in the 3D environment. While rudimentary, the system works well in VR. I also appreciated that you can ‘inspect’ your current starfighter from multiple angles and, if you like, sit inside the cockpit without any enemies, asteroids or satellites to worry about.

Navigating these environments feels weirdly primitive on a TV or monitor, though. And that’s a shame, because it’s the only time when the game sides with a particular playstyle. Was the issue avoidable? Possibly, if the developers had the time and resources to flesh out the hangar locations and implement a traditional movement system for non-VR players. But that’s a lot of work for a relatively small part of the Squadrons experience. An important part of scoping is focus, and in this situation Motive probably made the right call. The game is primarily a dogfighting simulator, after all, rather than a narrative adventure like Tacoma.

That focus extends to how the story is delivered. At the start of the game, you get to choose what each of your pilots are called, as well as their gender, face and voice actor. It’s a neat idea with some obvious trade-offs. You’re never referred to by name — simply Titan Three and Vanguard Five — and only speak occasionally during missions. Then, back at the hangar, both of your characters are eerily silent, similar to other iconic gaming heroes such as Gordon Freeman, Doomguy and BioShock’s Jack. Comrades will praise your combat ability and mention where you were stationed between the prologue and mission one. But you’re never given a personality like Iden Versio was in the Battlefront II campaign. It’s on you, therefore, to fill in the blanks.

The game’s supporting cast is terrific.

Thankfully, the game’s supporting cast is terrific. Vanguard Squadron has personalities like Keo, an ex-racer that’s mildly force sensitive, and Grace, the rebellious child of a family that manufactures TIE fighters. Titan Squadron, meanwhile, has Shen, a battle-scarred pilot held together by cybernetics, and Grey, a former police officer that’s ready to retire. Chatting with these characters is entirely optional. But if you skip them, you’ll be missing out on some usually interesting backstories and perspectives. I particularly liked Sol’s conversations, which explore the need for a new Imperial Senate following Emperor Palpatine’s demise. 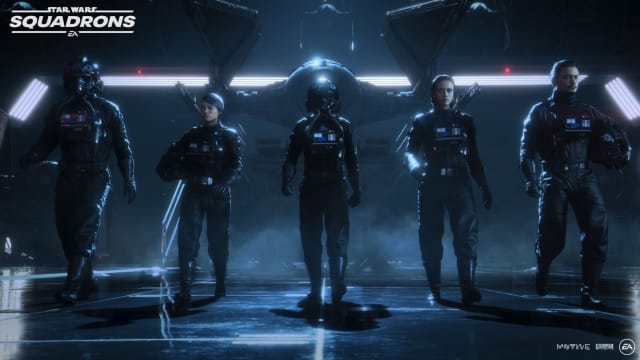 I played through half of Squadrons’ campaign in PSVR, and the other half on my living room TV. I’m torn between the two experiences, and that’s a good thing. VR is a better representation of what it would actually be like to actually sit inside a TIE fighter. The distance between the screen and your eyeballs also does a better job of replicating peripheral vision in combat. The trade-off is visual fidelity, though. The experience in PSVR was noticeably murkier than my living room TV. When I wanted to truly admire a nebula, or the anger sweeping over commander Kerrill’s face, I took the headset off and played the traditional way for a while.

The ideal setup, of course, is a PC-powered headset and compatible flight stick. But most people don’t have access to that sort of hardware. And thankfully, it doesn’t matter. Hangar navigation aside, the game is still thoroughly enjoyable whether you’re playing in front of a TV or monitor. Motive achieved this by sticking to a smaller, simpler concept that revolves around a fixed first-person perspective. It doesn’t have the sprawling ambition of Battlefront II, but that actually helps to minimize features that would make one playstyle feel like an afterthought.

Squadrons is further proof that Resident Evil VII wasn’t a fluke. With the right concept and design decisions, it’s possible to build a game that caters to the VR and TV crowds equally. It’s a model that’s hard to replicate, admittedly, and ill-suited to some game genres, like third-person cover shooters. But it’s one that studios should be thinking long and hard about before embarking on their next VR project. If you can build a game that goes beyond the VR player base, you can theoretically spend more, and make more, without relying on a blank check from Oculus or Sony.