For one, you’re on a 30-second timer. Defeating Goombas and other iconic enemies will add precious seconds to the clock, so you’re encouraged to move fast and make every jump count. Dispatching baddies will also send them into another person’s game. They’re painted a light phantom-like blue to show they weren’t part of the original game design. But don’t be fooled by their translucent appearance: if you touch one, it’ll hurt just the same as a normal Goomba or Koopa Troopa. That means everyone’s screens are quickly inundated with new obstacles. It’s like someone mixed Mario with Left for Dead or the wave-based horde mode from Gears of War.

The level is still portrayed in the original’s square aspect ratio. Everyone has widescreen TVs now, which means there’s plenty of space on either side to show what the other 34 players are up to. These windows update in real-time, but it’s hard to focus on them when you’re avoiding a seemingly-endless conga line of Goombas. At any time, though, you can nudge the left stick (or the D-pad, if you’ve chosen to flip the controls) to choose a different ‘target’ for your next batch of defeated enemies. It’s a strategic layer that’s difficult to utilize because it takes too long to judge whether someone is winning or on the brink of elimination.

Thankfully, the game offers four strategic options — Random, Lowest Time, Most Coins and Attackers — that you can switch between with the right analog stick. I like the idea, but again it’s hard to know when you should be targeting a specific type of player, because you don’t have enough time to see how other people are faring. In the end, I chose ‘Lowest Time’ when I was struggling in a match, thinking it would keep the back of the pack behind me. If I was storming through the level, however, I switched to Most Coins and Attackers, because they focused on the people who posed the biggest threat to my pixelated plumber.

Time and enemies aren’t your only concern. If you collect 20 coins without dying, an ‘Item Roulette’ will appear in the top left-hand corner of the screen. You can spin it whenever you like and earn either a mushroom, Fire Flower, Super Star or POW, which instantly destroys all nearby enemies. If the roulette gives you something useless — a mushroom, for instance, while you already have a Fire Flower — you can normally re-roll. These power-ups can be a literal lifesaver if you find yourself surrounded by Koopa Troopas while in Mario’s smaller ‘one-hit-means-death’ form. 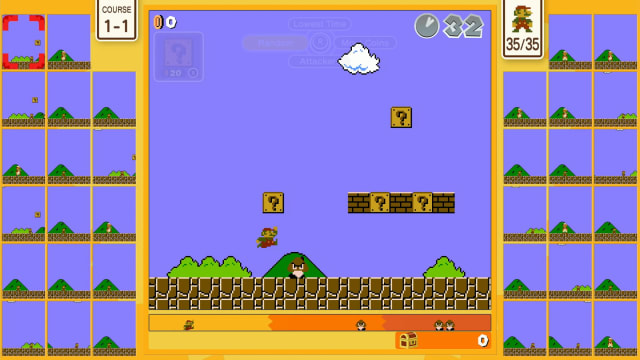 Coins can also be used to buy items before the start of each match. Twenty will grant you a mushroom, while 30 supplies a Super star and 50 equips you with the Fire Flower suit. These buffs are critical if you want to reach the latter stages of each match. The Fire Flower, for instance, works just like it did in the original game. That means you can quickly clear everything on the screen — even if you’re being targeted by multiple players — and restock your timer. The power-up can be used offensively, too, to quickly send enemies over to another person’s game. It’s arguably essential at the start of each match when everyone is still alive and, as a consequence, sending the largest amount of enemies back and forth.

Fifty coins is a lot, though. When you spend that kind of money, you’re betting that you’ll acquire the same amount, if not more, throughout the match. Otherwise your reserves will quickly deplete and you’ll be forced to start each match as Small Mario. But here’s a simple trick: if you’ve played Super Mario Bros. before, you’ll know that there’s a block containing a mushroom at the start of 1-1. If you start as a larger Mario, though, a Fire Flower will appear there instead. Sure, you’ll waste a few seconds breaking the block and collecting the power-up, but then you only need to grab 20 coins to come out even at the end of the match.

If you reach the flagpole at the end of World 1-1, you’ll instantly load into another course. Sometimes it’s 1-2, but I’ve also warped into 1-3 and 1-4 before. I think the game decides the next course based on how many people are left in the match. If three survivors remain, they’ll only be sending the odd enemy into each other’s games. A tougher stage is therefore needed to offset the lower ‘attack’ frequency. World 1-4 — the first castle course in Super Mario Bros. — requires more skill than 1-1. That means a single extra Goomba is more likely to trip someone up and end the match. 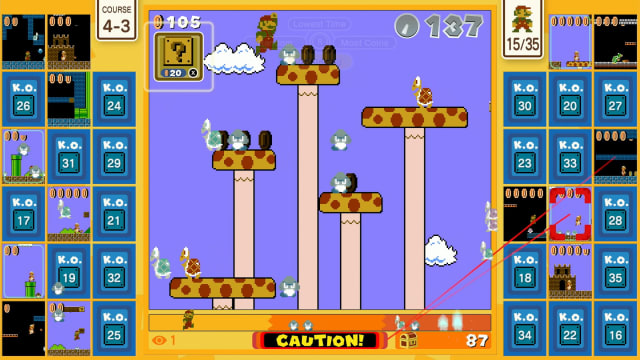 When you reach a new course, it’ll be added to the menu where you pick your starting power-ups. You can choose a starting level for the match, but it appears to be a vote that’s weighed against the rest of the group. I’ve picked World 1-2, 1-3 and 1-4 numerous times, but every match has always started at 1-1. I suspect there will be more variety once everyone has beaten the opening few courses.

Participating in matches will net you experience points, which adds to your level and unlocks 8-bit player icons. There’s also a few daily challenges which might ask you to. Defeat a set number of enemies or collect 20 coins and use the Item Roulette for the first time. Finishing these will net you a large amount of coins that can then be spent on starting power-ups. Notably, there’s no store or premium Battle Pass system. You can’t change Mario’s in-game appearance, either, or unlock sprite swaps similar to Super Mario Maker. (I would love to compete as Babymetal, for instance.)

There’s a Course Practice if you want to quietly reacquaint yourself with some of the game’s classic levels. Mario veterans, meanwhile, will appreciate the rotating Special Battle event, which changes the normal rules and level variety. When I jumped in, for instance, everyone started on World 2-4 — regardless of whether they had unlocked the course before — and with enough coins to play the Item Roulette. I played a few rounds but ultimately went back to the standard game mode because it was less chaotic and I found it easier to survive for longer than 60 seconds. 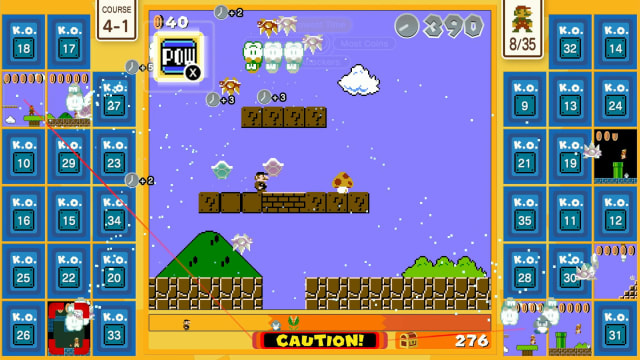 Super Mario Bros. 35 is a lot like Tetris 99. Both combine classic gameplay with a pinch of the battle royale formula that has dominated the multiplayer scene over the last few years. And the concept works, to an extent. Super Mario Bros.’s levels are fun to play through and the additional enemies force you to think differently about coins and power-ups. The genre blend doesn’t feel quite as natural as Tetris 99, though. Dealing with unwanted blocks is the entire point of Tetris, whereas Mario is all about carefully-considered level design. When you’re ‘attacked’ in Super Mario Bros. 35, it’s like someone is adding random words to an otherwise perfectly-written book.

I’m unconvinced by the game’s pacing, too. The early stages of each match are a wonderfully-chaotic bloodbath. Once the player count starts to drop, though, the battle royale morphs into a simpler contest of Mario mastery. ‘Attacks’ still occur, but it’s essentially two people sprinting through levels they’ve played a million times before, waiting for the other person to mess up. These often long and drawn-out sequences feel like the ‘build battles’ that occur at the end of competitive Fortnite matches. They’re skilful and mesmerising, but almost feel like completely different game mode.

I had some fun with Super Mario Bros. 35, but I don’t think it will keep my attention much longer. And maybe that’s the point? The game is completely free for people with a Switch Online subscription. There’s no in-game monetization and few progression systems to keep you hooked. Heck, even Fall Guys has more unlockables at the moment. Nintendo has also said that the game will disappear in March next year. For me, that sends a clear message: this is just an experiment. A throwaway celebration to coincide with the 35th anniversary of Super Mario Bros. It’s not supposed to be a service game like Rocket League or PUBG. It’s a novelty that you dip into for a night, enjoy and then delete.

Cynthia Bailey Offers Her Thoughts After Watching The Presidential Debate