The Freewrite Traveler is a lovely (and flawed) e-ink typewriter 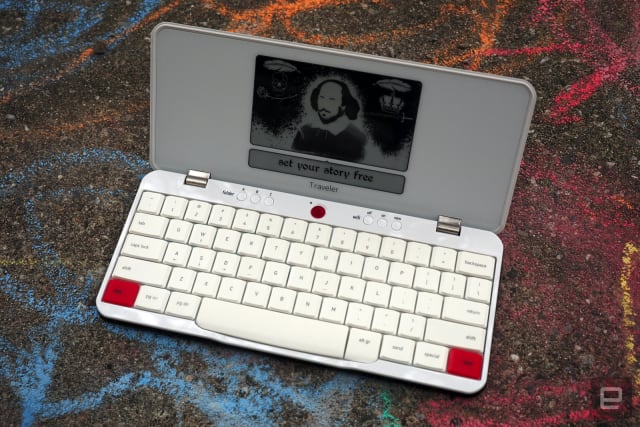 The Traveler continues that tradition of distraction-free writing, but in a smaller form. It eschews the typewriter form factor for a clamshell design, not dissimilar from a laptop except narrower along its vertical axis, with two halves that are no more than six inches tall. The screen is also smaller than a laptop; no super-thin bezels here. Instead your text will appear on a six-inch e-ink display, with a small secondary ticker below that can show stats about your current piece of text. As of the start of this sentence, this article is 369 words, with a 1:52 minute reading time and 2,092 total characters.

The display isn’t bigger than the original, though it does seem a little shinier. That would normally be a problem on an LCD or OLED in direct sunlight, but here it’s far less of an inconvenience. The entire product is shinier, which is a bit of a problem: The outside of the clamshell is a glossy black that shows fingerprints easily and won’t look so great after it starts to pick up nicks and scratches from being carried around. You could baby the device, but that’s not the point. This is meant to be taken everywhere. In fact, the size and shape reminds me of a book. I end up wanting to take it with me to the park or beach. 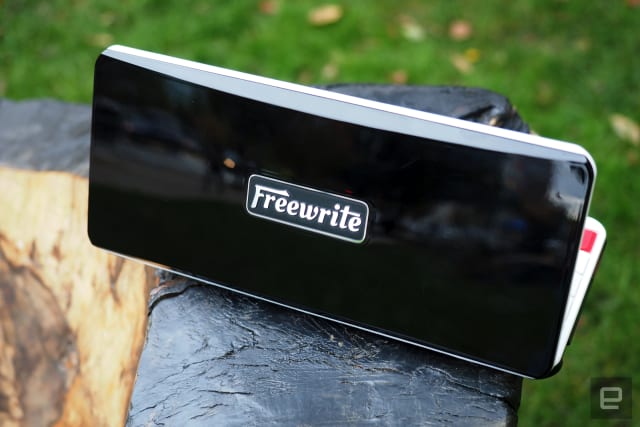 Before you head out and about, though, you’ll need to set it up, which has its ups and downs. In theory, this process should be easy. There’s a dedicated button for adding a new WiFi connection, and after you enter the password it prompts you for a Postbox account. Postbox is the Freewrite’s online document storage system, allowing you to sync your drafts and view them when you get back to a real computer. If the idea of a proprietary system doesn’t thrill you, never fear: Postbox can then send documents to your choice of Evernote, Dropbox or Google Drive. I opted for Dropbox since that’s where I keep all my text files. The Traveler automatically syncs whenever it’s connected to WiFi, so you don’t have to worry about manually backing up or even saving — the device will just do it. I could close this thing right now and not lose a single letter.

But that’s only because I’ve got it set up already. When I originally went to create my Postbox account, I hit a snag. You input your email and it’s supposed to send you a link to set up a password and finalize your account. However, instead the link took me to the login page, for which I needed a password. When I tried the “forgot password” link, the system told me my account didn’t exist. I had to wait a few hours for the system to acknowledge that I did, in fact, have an account. Once you’ve cleared that hurdle everything should work fine, but it was a completely baffling hurdle to encounter in the first place. I reached out to Freewrite and Astrohaus claims to have corrected the problem on the site. 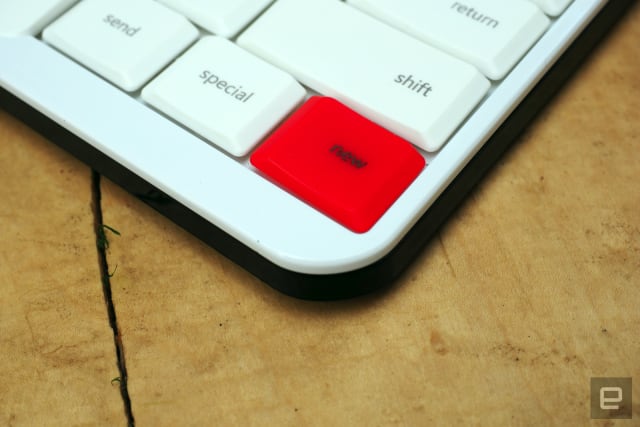 I can report that from there it’s pretty simple, if not extremely intuitive. To start a new document you hold down both “new” buttons on each side of the keyboard, colored bright red in contrast to the white keys. To switch folders you simply hit the button for each folder, marked A, B and C. That’s just folders and not total documents; in theory you could have millions of documents stored on the device though that would make navigation a pain. Right now I’m using folder A for articles for my food zine, while this story you’re reading lives in folder B.

The smaller profile means that Freewrite couldn’t pack a mechanical keyboard into the Traveler, but the scissor switch deck they’ve replaced it with still has plenty of bounce in each key press that it’s not a huge loss. It’s also quiet, which should be great for classrooms and libraries. 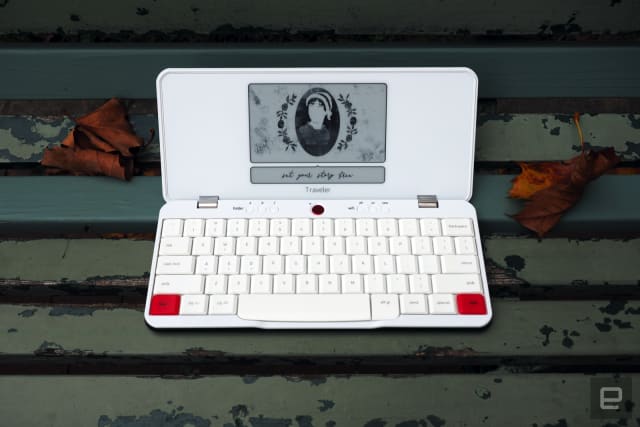 The screen looks good in both dim environments and bright sunlight. There’s no backlighting, however, meaning your fantasies of typing by candlelight will probably remain dreams.

The ability to angle the display is certainly welcome. Yes, it’s still way smaller than the average laptop screen but when you’re just working with text that’s not an issue. Not being able to see my entire document in one shot is actually liberating, as I’m less tempted to go back and make small changes before I’ve finished writing. If you do need to go back and tweak something, the Traveler now has keyboard shortcuts to hop around the text, though they should be used sparingly thanks to the slow response time of the screen. 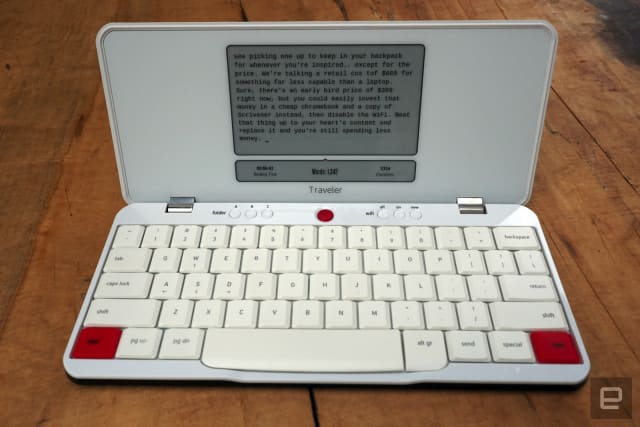 And that is the major dealbreaker with the Traveler: the time between when you type a letter in and when it appears on the display is annoyingly slow, more than a full second. If you’ve decided to just let the muse flow and don’t care what your text looks like maybe it’s not a big deal. The idea of the Freewrite is to keep you moving forward, and let you worry about editing later. But it’s absolutely maddening to realize you made a huge typo several sentences ago and not be able to fix it now. You see that “more” a few lines up there? I see I didn’t type the “m” so I’ve just had to tab back up there to fix it. This wouldn’t happen with a faster response time, where I could see my errors before I’ve already moved on several words or even sentences. I’m a pretty fast typist, but I am not a very neat one. My editor has her work cut out for her.

Read More: The Freewrite Traveler is a lovely (and flawed) e-ink typewriter