The iPhone 12 has 5G and a new flat-edged design

In a big nod towards future-proofing, the iPhone 12 will include 5G connectivity, a first for an iPhone. As expected, the iPhone 12 works with the “sub-6” spectrum that is more widely deployed currently. In the US at least, the iPhone 12 will also work with mmWave 5G networks — that’s currently the only 5G network that Verizon, the biggest US carrier (disclosure: and Engadget’s parent company) currently uses. Given that Apple certainly doesn’t want to worry about splitting hairs between different types of 5G, it makes sense to see it on board here.

Unsurprisingly, the iPhone 12 is powered by Apple’s A14 Bionic chip that was announced last month with the latest iPad Air. It’s similar to the A12 and A13 before it in that it combines six CPU cores (two high-performance, four lower-power for better energy efficiency) and four GPU cores. But for the first time, the A14 is built on a 5nm fabrication process, which essentially means they’re more densely packed with transistors. Specifically, the A14 includes 11.8 billion transistors, up from the 8.5 billion in the A13. What this means for you, dear reader, is that the A14 should be about 15 percent faster than the A13 while using 30 percent less power. 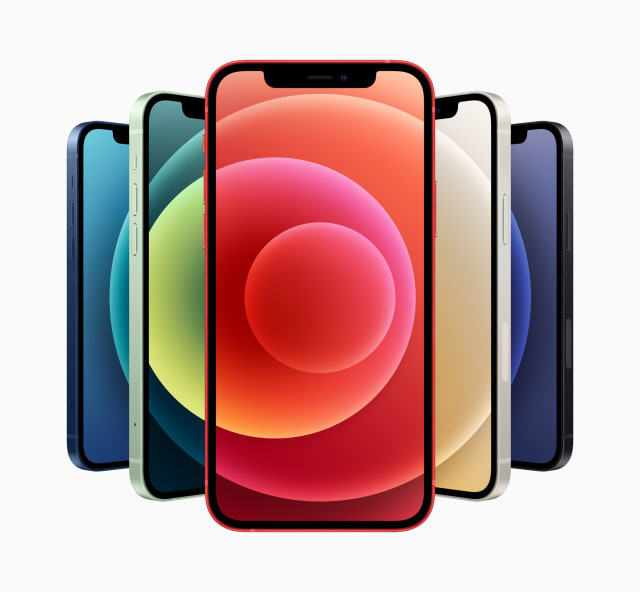 Between the A14 chip and 5G network support, Apple used this opportunity to announce a new partnership with Riot Games, which will bring League of Legends to the iPhone. Specifically, it’s a mobile version called League of Legends: Wild Rift.

The iPhone 12 features a new standard wide camera with an f/1.6 aperture and a seven-element lens alongside the same ultra-wide camera that was in the iPhone 11. Apple says that the standard camera has a 27 percent improvement in low-light performance compared to last year’s iPhone. On the video front, the larger aperture will allow for more detail in low light, as well. And there’s a new night mode time-lapse feature which Apple showed off in a demo video shot around Las Vegas. This is the kind of thing we’ll need to try ourselves, but the time lapse feature looked pretty impressive in the demo.

Naturally, the iPhone 12 has wireless charging, but the back also has new magnetic sensors that allow for some pretty neat tricks. Specifically, MagSafe for iPhone lets iPhone chargers snap right into place. It looks like Apple is also making some magnetic accessories like a credit card case that snaps to the back of the phone, for example. As for that MagSafe charger, it looks basically like a large MagSafe charger from the Apple Watch. Speaking of the Watch, Apple is also making a dual charger for the iPhone and Apple Watch that folds up easily for travel.

On the environmental front, Apple is taking the same move that it did last month when it removed the power adapter from the Apple Watch. It’s also removing the Lightning headphones from the box, as well. As before, Apple says it’s doing so to reduce the manufacturing needed for such products; it also means the boxes are smaller so they can ship things more efficiently. It’s also using 100 percent recycled rare earth materials for the first time. Apple says the changes it made to the iPhone 12 are the equivalent of removing 450,000 cars from the road. On the plus side, the iPhone 12 will come with a USB-C to Lightning cable for fast charging, something that wasn’t standard before.

The iPhone 12 will cost $799 at launch with 64GB of storage; 128GB and 256GB models are also available. The colors this year are black, white, red, green and blue. It goes on pre-sale this Friday, and will be fully available as of Friday, October 23rd.

Read More: The iPhone 12 has 5G and a new flat-edged design