Ultimate Ears promises eight hours of battery life on the buds themselves, with another 12 hours in the case. It’s odd to see a charge and a half extra instead of two (or three) full cycles. 20 hours of total listening time is still pretty good though, and eight hours on the earbuds will get you through a full workday of non-stop use. Indeed, I managed just over 7.5 hours of continuous playback before I had to tuck these away. Confusingly, the app said the left earbud still had 30 percent battery left. Ultimate Ears confirmed my suspicion about what might be the cause: the right earbud is the main connection and the left piggybacks off of it.

One word of warning: the initial setup process will use a considerable amount of battery. This isn’t a deal breaker by any means, but it takes significant power to light up those LEDs. So after the molding process, you can expect battery levels in the earbuds to be around 60 percent — or at least that was my experience. Obviously, you can immediately use them for the rest of that allotment or return them to the case so you can begin at 100 percent later.

Getting to 100 percent is an exercise in patience. The case seems to top off in an appropriate amount of time, but the earbuds take several hours to fully charge. Multiple times I opened the case after they had been in there for at least four hours and the flashing LEDs indicated they still weren’t done. Sure enough, the app confirmed this, and it was a headache every time I needed to recharge dead earbuds. 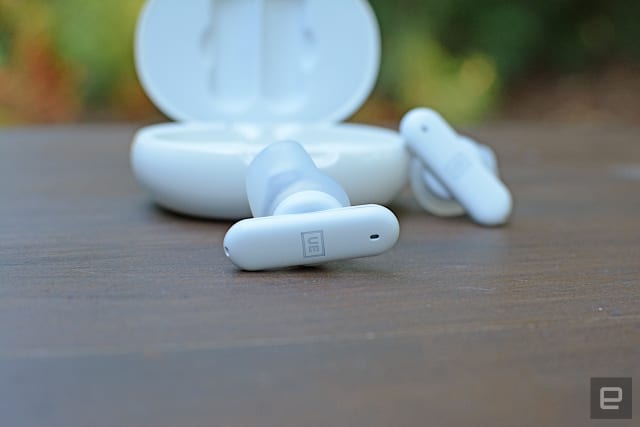 I’ve reviewed a lot of true wireless earbuds, but I’m not aware of any other company that uses this kind of technology to mold semi-custom ear tips. I feel confident saying Ultimate Ears has a unique feature there. At $249 they’re in the same price bracket as premium offerings from Bose and Sony, though, which offer powerful active noise cancellation (ANC) on their QuietComfort Earbuds and WF-1000XM3, respectively. The UE Fit doesn’t have ANC, but one you’ve molded them to your ears, they do a great job of passive noise isolation.

Both Bose and Sony have more robust on-board controls and, in turn, more customization options. And the QuietComfort Earbuds and the WF-1000XM3 have much better sound quality than these Ultimate Ears buds. But neither of them tout a fit system like these UE buds. Plus, Ultimate Ears is currently offering the Fits for $209 during the pre-order period, which makes them a more attractive proposition.

I’ll admit it: when I first saw the UE Fits I really thought they were a gimmick. But the more I thought about it, the more a mold-it-yourself system made sense for the maker of in-ear monitors. And if any company has the ability to create a system like this that actually works, it’s Ultimate Ears. The fitting process is quick and easy, and eventually you’ll be able to check to make sure you did it correctly. But at the end of the day, the features list is a bit limited and the sound quality fails to consistently impress. If you can live without ANC though, the UE Fits are certainly unique. And sometimes being different is all you need to rise above the competition.