Bolter added that if he wanted to shoot Percival on location, it would be a long process. “If I was in a moonlit forest, we’d [shoot] from 9pm to 7am, which is horrible, and a moonlit forest is interesting because it’s so fake,” he said.

“Woods at night are [pitch dark] like the Blair Witch Project. There’s no such thing as a ‘moonlit forest’. We have massive lights on cranes and we backlight it all,” Bolter said. He continued that if, on the day of the shoot, the crew needs the lights to be adjusted, it’s a long process to take down each crane and move it to change the setup.

In Percival, the knight is “pushed” through time with a faux-timelapse in which the days and nights fly past. Since the studio has a screen covering the inside of the roof, the team could build a digital moon to move across the sky as it would in reality. But this didn’t “look and feel right” compared to the audience’s expectations of how cinematic moonlight works. In a matter of minutes, however, Bolter swapped the moon for a white, circular JPEG that rolled across the ceiling to create a more cinematic feel. Compared to the hours it would have taken in the real world, being able to make the change in mere minutes inside the Unreal engine was a revelation.

Traditional big-budget movies rely on pre-visualization; crudely-made clips that help creators get a better sense of their film. So much of the VFX material won’t be finished for 18 months after shooting finishes, so these [clips] help them understand what the film will look like. It also helps them plan the shoot, picking shot angles and lighting styles before set builders bust out the drills and hammers. With a virtual studio, “All of the VFX and set extension is done in-camera and on set,” said Sun. Rather than employ a legion of CGI artists, Percival’s environments were created in Unreal Engine by three artists in just two weeks. “Virtual production,” said Sun, “is a real-time technology, it’s rendered in real-time, and it’s interactive.” 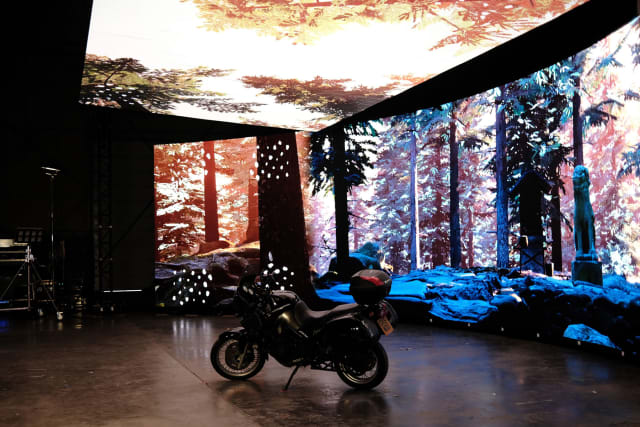 Every knight of the round table needs a trusty steed…

“We had this massive chain of emails and Dropboxes,” said Bolter, “with CGI renders of what [the artists] built, and we’d be able to say ‘okay, this is great, take that away, move that.’” The crew could even make last-minute changes to the set as he was traveling to the shoot, “then, suddenly, an hour later, it’s changed.” Compared to the setup of traditional films, this was almost luxurious, especially in terms of the levels of control afforded to filmmakers.

It helps that, in the longer term, it should be far less expensive to shoot specific scenes than it would to travel to a location. Bolter suggested a hypothetical short scene featuring two people talking in a desert at sunset, which could take up to three weeks to shoot. “You’d have to fly a crew to Morocco, go out into the desert, and you’d have about 15 minutes of filming per day.” By comparison, Bolter could fly himself to Morocco, “shoot a [background] plate” which could then be played back on the virtual studio’s screens over and over again. Suddenly, that sequence takes a day, with all of the cost savings that brings.

It this part that excites the people who are bankrolling the production process, like Orlando Pedregosa. He’s Chief Production Officer at Film.io, a company backing film and TV projects, who said that LED screens can offer savings close to “99 percent of the construction and production design budget,” with background plate shots saving around “70 percent, thanks to a reduction in items like transport, insurance, hotels and cast/crew expenses.” In real terms, he said that’s a potential saving of up to €1.5 million ($1.7 million) on a single set-up for a movie. Given the effect the pandemic is having on cinema right now — with major chains facing closure for the next few months as screenings become impractical — cheaper is better. 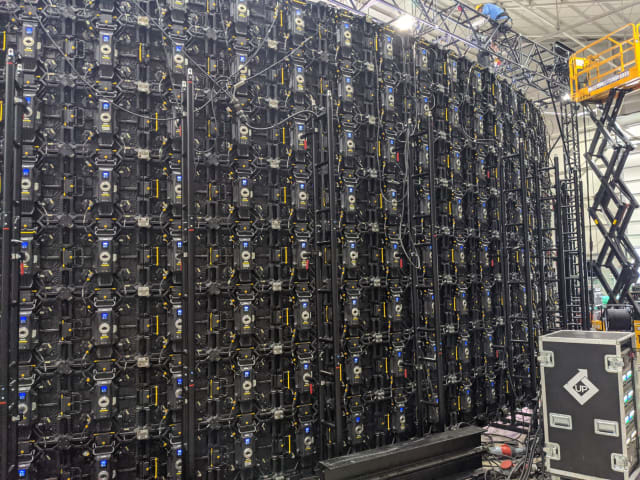 Around the back of the virtual studio.

Bolter believes that we’ve barely scratched the surface for what virtual studios can do. “If you wanted to build an office block [for a movie], you can go crazy and have a thousand cubicles,” he said, “or an infinitely ridiculous, Charlie Kaufman-esque environment and you just need to build one cubicle [as a real set] and block the edges of the physical set to hide the problems.” That’s one of the key downsides, too, since the virtual studio has a number of physical limitations to work around. “You’ve got the ceiling, you’ve got the floor, and those things don’t blend together [with the wall],” said Bolter. The freedom to shoot horizontal vistas is great, but you can’t pan up and down without risking people seeing the very obvious join.

“The ceiling is for lighting, really, unless you’re doing some sort of weird shot when you’re looking up someone’s nose,” said Bolter. It’s on filmmakers to work around these limits, which could be possible using virtual camera movements inside the computer. “The background itself can ‘conveyor’ around, to fake the sort of Michael Bay spinning steadicam shots,” said Bolter, so long as there are no props or scenery in the real studio, since “trees won’t spin.”

It’s worth saying that the technology is not at the point where you could dump every project in front of it and expect success. Bolter says that the current setup is “around 90 percent,” and looks “720p to the naked eye — impressive, but only nearly good enough.” Percival isn’t aiming for photorealism, and leans into its stagey, ethereal quality, but you wouldn’t guess it was shot in front of a TV unless you already knew. And I have seen other, unpublished demos from Rebellion that looked a lot more realistic. A test sequence of a motorbike riding through (video) of central London is unbelievable. Footage of a person in a floaty dress standing on top of a hill (think: a perfume commercial) similarly looks like it was shot in the Welsh countryside. Give it a year or two, for the technology to mature even a little, and this could become a viable tool for any number of films and TV shows.

It’s likely that Rebellion will want to use virtual studios as the best way to build its new multimedia empire. In 2018, it announced that it was working with Duncan Jones (Moon, Warcraft, Mute) on a Rogue Trooper movie. And it’s also got the long-in-the-works Judge Dredd: Mega City One project looming on the horizon. Making a TV series on that scale would surely cost a huge amount with traditional green screen techniques, but perhaps this technology will make projects like this financially viable.